Writing a Recipe for Creativity

Crack open an egg and find a character or a place.

That was the concept a group of Suffolk students brought to youngsters at a writing center where vacationing schoolchildren spun the prompts into stories about alternate universes. 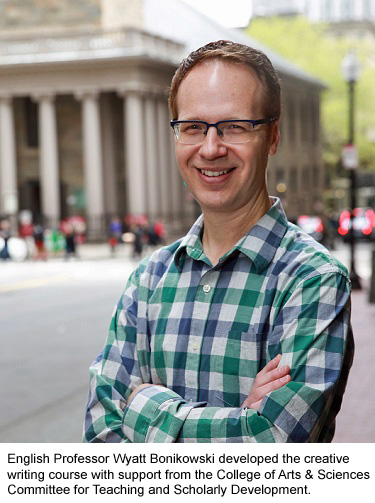 The students’ collaboration grew out of English Professor Wyatt Bonikowski’s project-based creative writing course, developed to see how students could “keep their interest in writing alive by taking a creative approach.”

His course also melded service learning, creativity, and innovation as it created connections between college and underserved Boston students through 826 Boston, a youth writing and publishing nonprofit.

Bonikowski’s students worked on creative writing with elementary students during April school vacation week and tutored high school students throughout the semester to fulfill the service aspect of the class.

“Wyatt had a dream of offering a course that connected with literacy in the city— empowering the community through writing and lifting their voices” said Jennifer “J.J.” Mercado Javier, the volunteer manager for 826 Boston. Javier connected with the professor a year ago through Suffolk’s Center for Community Engagement and saw the collaboration as furthering the 826 mission of empowering the community through writing.

“What’s Wrong with This World?”

Once the eggs were opened, the 6-to-8-year-old students spent about 20 minutes developing characters and stories based on their prompts and the overarching theme: What’s Wrong with This World. 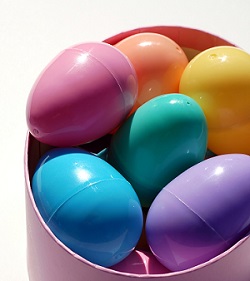 Then the young students joined forces, adding attributes to one another’s characters and merging story lines, according to Victoria Marinzel, who helped lead the Easter egg session at 826 Boston’s Egleston Square storefront location.

She said that Bonikowski had prepared them well for the session with the children, both through the creative exercises introduced in class and familiarity with the 826 program setting.

“We had visited and observed, and we saw that the kids get antsy, so we made sure they had some time to run around,” said Marinzel, Class of 2020, who is majoring in French and Spanish.

Bonikowski encouraged his students to consider “how our own ways of thinking about creativity could translate to working with these young people.” He asked them to reflect on their own younger reading habits and whether their parents had read to them.

“We talked about teaching as we got closer to the workshops, and JJ (Javier) came in and did trainings on managing a group” and other aspects of working with the young writers, said Bonikowski.

Kate Eaton, who chose the class because she is interested in creative writing and is committed to volunteering, found the session with the youngsters “a lot of fun.” She also valued the high school tutoring process, which led her to insights about problem solving.

Suffolk’s Creativity & Innovation courses encourage first-year students to take chances as they establish creative practices. These required courses are aimed at instilling flexibility in thinking so that students will explore new ideas without fearing failure

While Bonikowski’s class was divided into five groups, each of which proposed a detailed lesson plan to 826, the writing center would choose only four Suffolk modules for its vacation-week program.

“Part of learning about creativity is to learn to deal with failure,” said Bonikowski. “What’s good about (a Creativity & Innovation) class is that it teaches students about the creative process and that not all ideas succeed. It’s disappointing if your idea does not get picked, but you deal with and learn from that. Everyone had opportunity to participate in the workshops.”

The class incorporated service learning in its truest sense: The students’ volunteer activity benefited the community, and they learned from their community involvement.

“Many classes talk about going out and volunteering, but it actually was part of this class,” said Marinzel.

A key personal lesson for Eaton was “to turn the creative impulse into a habit” through the 15-minute daily journals or creative activities required as part of the class. Her creative interests lie in poetry and photography.

“The assignments kept me doing what I want to do,” said Eaton, Class of 2020, who is majoring in psychology. “I also was more inspired to be creative and more colorful in my writing – even academic writing.”

Both Eaton and Marinzel, who wrote part of a novel and some poetry as she developed her habit of creativity, expect to keep up the practices they developed over the semester.

Pride in their work

The Easter egg writing lesson plan allowed time for the students to share their stories, but they wanted to keep going with the writing, said Marinzel. “I was pleased they were into it,” she said.

Eventually all 12 students presented, although one had a volunteer read his work.

“I saw students who were ecstatic to share what they had created and how warm and appreciative their parents or guardians were,” said Javier. “They were beaming with pride. One student was so excited that her mother signed her up right then for the week’s remaining workshops.”

Javier said that the creative writing experience empowers young people, and it’s rewarding to see them with smiles on their faces as they leave the writing center.

“Eight-two-six wants to leave students with something – a smile, a project, a story, or a new friend,” said Javier.

And over April vacation, Suffolk students helped make that happen.