From MGH to Mars

With NASA dedicated to launching a Mars mission in the 2030s — and companies like Elon Musk’s SpaceX promising to get there even sooner — preparing for the challenges of long-distance space travel has rapidly moved from science fiction to scientific imperative.

Students in Suffolk University’s Physics Department are confronting one of the biggest dangers astronauts will face: intense radiation in the form of galactic and solar cosmic rays.

“The earth’s magnetic field normally shields us from the harmful rays,” says Professor Walter Johnson. “The farther we get from the ground, the more direct radiation we’re exposed to. In the course of the two-year mission to Mars a person would receive a lifetime’s worth of radiation exposure.”

Paul Johnson, a physics major in the class of 2018, sees the promise of space travel and colonization as an opportunity for “an enormous collaboration of people using the scientific method” — and he’s eager to contribute.

He approached Professor Johnson (no relation) with an ambitious plan to conduct their own radiation shielding research.

The problem? In order to study radiation shielding, they needed a radiation source.

The world-renowned medical team down the street at Massachusetts General Hospital’s Radiation Oncology Department uses linear accelerators every day to generate therapeutic doses of radiation to treat cancer. The multi-million dollar machines are ideal for research because the dosages required for effective patient treatment necessitate precise and repeatable energy output.

Thanks to a longstanding collaboration between MGH and Suffolk through the University’s radiation therapy and medical dosimetry programs, Professor Johnson was able to bring the research proposal directly to David Gierga, Medical Physicist at MGH, and Jacky Nyamwanda, Suffolk’s medical dosimetry education coordinator.

Since the summer, Gierga has devoted one night every month to the project. After a full day of performing clinical and research duties, he works into the evening with the Suffolk students to carry out meticulously planned experiments. 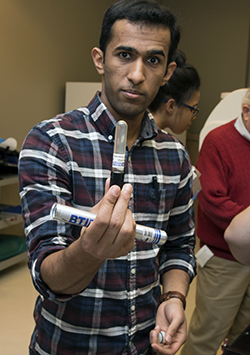 During their most recent session, several students worked in concert to conduct three separate experiments. Johnson and fellow seniors Allen Alfadhel and Mario Rojas took the lead in placing neutron bubble detectors around the treatment room to measure radiation dispersal. Bubbles are created inside the glass tubes when neutrons pass through — by counting the bubbles, students can measure the absorbed radiation dose.

This time, they’re testing the efficacy of the meters, measuring radiation levels around the room at various angles and distances from the linear accelerator, and using a copper foil target to measure low energy “thermal” neutrons. The foil absorbs neutrons, becomes radioactive, and the activity can be used to determine the number of neutrons absorbed.

Their findings will add to the available data on the precise levels and types of radiation astronauts might face at various points in their Mars mission. It’s a critical step toward mitigating those effects with the right protective materials.

“Throughout the process, we’ve learned how to set up, record data, and break down equipment under the stress of time, as the use of the treatment room is incredibly important to patients and medical professionals,” says Paul Johnson. “This means efficiency and planning.” 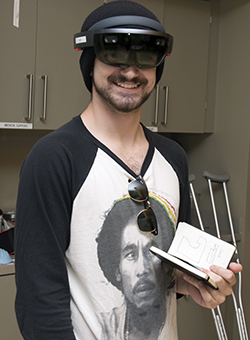 So while the rest of the group set up the experiments, Jackson Nolan, Class of 2019, used the Microsoft HoloLens — and an old-fashioned tape measure — to take detailed measurements of the room. Using augmented-reality technology, Nolan will be able to create a 3D model the team can use to plan future experiments from its lab at 20 Somerset.

“We’re tracking to see if the neutron scattering is symmetrical in different points of the room,” says Nolan. “If we can have a 3D model of the space that we can work with and manipulate we can use that to plan the experiments and map previous results.”

"We’re heading down this path and who knows where it will lead?" - Professor Johnson

Gierga enjoys working with the Suffolk students in part because mentoring is key to his and MGH’s educational mission, but also because he sees potential applications for improving patient safety.

“The documentation that I’ve seen in terms of the write-ups and their measurements has been very detailed and very insightful,” he says. “They’re interested in space radiation, but I could also see applications in the radiotherapy world for shielding design. We could use these detectors in conjunction with our existing shielding design calculations to create more detailed maps of radiation inside and outside the room.”

As Paul Johnson looks to graduate school next year, he’ll use his work on the Mars radiation project as a foundation:

“I'm excited to find opportunities where I can make a significant impact. I see myself working for a place within a space agency, industry, or my own startup company that focuses on space habitats and making space travel safe for the future.

“I wouldn't mind going to Mars, either.” 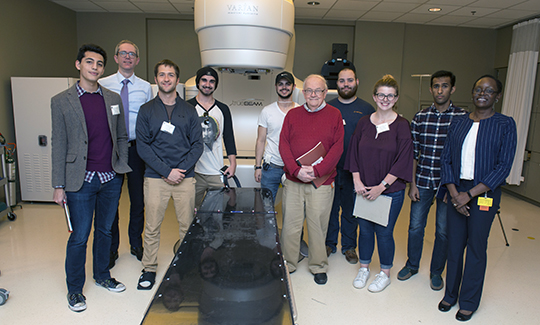