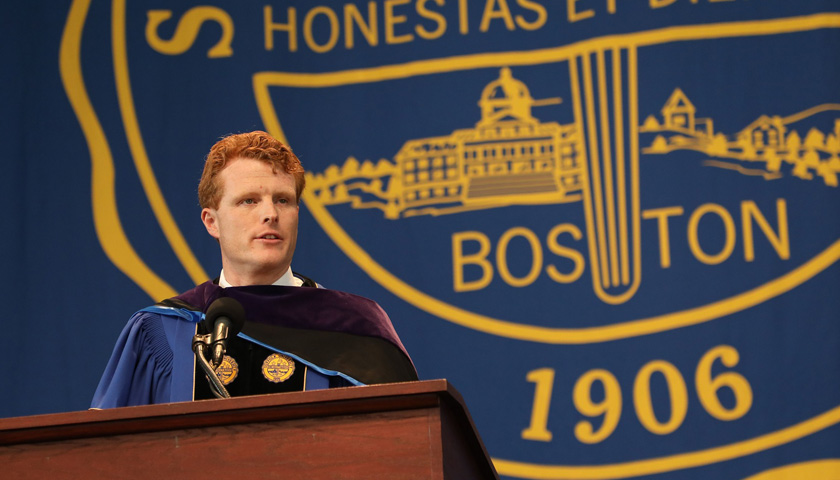 Congressman Joseph Kennedy III offered Suffolk University Law School graduates lessons about the elusiveness of justice in a commencement address that described “the disparity between those with access to power and protection” and those without connections and too tired to fight the battle.

He explained that this disparity is why attorneys need to remember that the law is personal, and to pay attention to the stories of those both lifted up and cast down by the nation’s system of justice.

Questions he could not answer

Kennedy recounted traveling to the Dominican Republic as a Peace Corps volunteer, where he helped a group of tour guides who were being exploited by an international tourist company. Through his help they gained increased wages and better work conditions.

Yet sugar cane workers nearby slogged through their days with no running water, no electricity and no sanitation, and the same people who had welcomed and cared for Kennedy showed little sympathy for these similarly oppressed workers.

“How could that be? How could the laws be ignored so blatantly by good people?” These questions, which he could not answer, pushed Kennedy toward law school, he said.

Once there, he saw the workings of the Boston Housing Court up close, watching families’ lives ruined. “The families we helped were subject to the very same laws that lay beyond the reach of those we didn’t [help],” he said. “What separated those who came through the system with a fairer outcome and those who didn’t was simply the presence of a lawyer.”

Kennedy also recalled a man he met as an assistant district attorney who would commit petty theft in wintertime just so he would be arrested and thus have a warm place to stay and food to eat.

A touch of humor

Kennedy, who received an honorary Doctor of Laws degree at the Law School ceremony, also shared a bit of humor, noting that as a newly designated Suffolk alumnus he is now a member of “New England’s best alumni network” and won’t get any funny looks when he crashes Suffolk parties in D.C.

“All that stands between you and a diploma is a ruthless graduation week hangover and me, but I’m one of the only Democrats who doesn’t have to rush off to Iowa or New Hampshire,” he said. “And you thought you were going to make it home to watch [Game of Thrones]. Well, settle in.”

Kennedy assured the Class of 2019 that the work they had already done in law school was proof that the law could actually serve ordinary people.

“Since the day you stepped foot onto the Suffolk Law campus, you haven’t asked for permission or waited for the validation of a diploma to do your part,” he said, noting that the class “had contributed more than 32,000 hours of free legal service to your neighbors facing eviction and racism, claiming asylum, fleeing domestic violence and asking for justice when wrongfully accused.”

By way of example of the Class of 2019’s selflessness and service, he shared the stories of a few graduating students, including U.S. Marine Captain Justin Rhuda.

Rhuda “spent two years fighting ISIS in Iraq and Syria, only to return to the United States, enroll in law school, and work pro bono for Veterans Legal Services.” Rhuda had “saved the roof over the head of a former U.S. Army prisoner of war and his family teetering on the precipice of homelessness,” Kennedy added.

He left the graduates of 2019 with a challenge: “To advance the law, shield it and strengthen it, and enable it for those beyond its touch.”

Kennedy, a former prosecutor and legal aid volunteer, in 2015 helped establish the first Congressional Access to Legal Services Caucus, which in recent years has fought to retain Legal Services Corporation funding. He also is working to strengthen protections for transgender students and military service members as chair of the Congressional LGBT Caucus’s Transgender Equality Task Force.

He is a member of the House Energy & Commerce Committee and an original sponsor of the Green New Deal resolution.

He holds a bachelor’s degree in Management Science and Engineering from Stanford University and a JD from Harvard Law School.

The Suffolk University Law School Class of 2019 is made up of 328 new alumni who received juris doctor, master of laws or doctor of juridical science degrees. The Law School ceremony was one of three Suffolk commencements held on Sunday, May 19, at The Rockland Trust Bank Pavilion on the Boston waterfront.

Suffolk University conveyed a total of 2,137 undergraduate and advanced degrees during weekend ceremonies for the Sawyer Business School, College of Arts & Sciences and Law School.

Suffolk University Law School, located in the heart of Boston, is dedicated to welcoming students from all backgrounds and circumstances and educating them to become highly skilled and ethical lawyers who are well prepared to serve in their local communities, across the nation and around the world. Suffolk Law has strong day and evening divisions. Its curriculum includes specialty concentrations, joint-degree programs and LLM offerings. A wide range of nationally ranked clinical and legal practice skills programs complement internships and moot court competitions that provide students with experiential opportunities. Suffolk University is comprised of the Law School, College of Arts & Sciences and Sawyer Business School.