In his fifth season as skipper, Del Prete led the Rams to a feat never accomplished before in the program's storied history, back-to-back GNAC regular-season titles. The blue-and-gold put together a 14-2 league ledger to top the nine-team for the second time in as many years and eighth time in program history. As the top seed, the Rams secured a first-round bye in the conference tournament for the third consecutive campaign, third season in the Del Prete and 10th time overall. Suffolk's run to its fifth conference crown came up short, however, ending in the semifinals. Del Prete was recognized by his peers as the best coach of the league for the second straight season and third time in his career.

The 13 Rams acknowledged are the most of any program among the league this season. Of Suffolk's recipients, three picked up first team – Tim Brigham, Blase Cormier and Will Hopkins – three sat on the second team – Rich Gilbride, Steven Rossi, and Connor Troio – two took home third team honors – Rich Giandrea and Trevor Lee – with four Rams gloves being named the top defensive players at their respective positions on the all-defensive team – Charles Batchelder, Cormier, Hopkins and Lee. 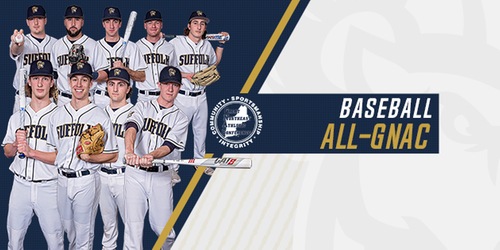 Brigham, a first-time honoree, made his presence known at the plate on the conference, regional and national level. The junior, who hails from Cape Elizabeth, Maine, had a knack for barreling the ball for doubles with 23 of his 60 total hits going for two bases. The righty hitter brought in 45 runs on a .390/.428/.597 slash line and scored 20 himself.

Cormier, a fixture at first base over his two seasons at Suffolk, the Wayland, Massachusetts, native had a career season at the dish with 58 hits on a .336 average with 30 RBI and 33 runs scored. In the field, he notched a .994 fielding percentage with just a pair of errors over 338 total chases to pick up all-defensive recognition for the second time in as many seasons.

Hopkins, who moved from left to center with the departure of one of the most decorated players in Suffolk history, Brady Chant, the sophomore picked up where Chant left on as the backbone of the Rams' defense. The sophomore filled the void errorlesslly, literally, as he successfully fielding his 105 chances in center for an unblemished fielding percentage en route to all-league defensive status as well. Offensively, he produced 47 hits at a .336 hitting clip to bring in 25 runs. The sophomore's stealth on the bases paid off as well, as he swiped 18 bases and came in for 37 runs.

Gilbride was an all-league selection as infielder for the second straight season and second-team honoree for the first time in his career. The junior shortstop tallied 42 hits 24 RBI, as the Rams' lead-off, batting .294 with 36 runs scored and 14 stolen bases.

Rossi threw his way to all-league status. In his collegiate debut season, the rookie RHP was one of Suffolk's core hurlers in the Rams' rotation. The Corning, New York, product threw 44.1 innings over eight appearances, all starts, for a 6-1 record with his lone loss coming to regional powerhouse Tufts. His 3.25 ERA was the best amongst the blue-and-gold's starting arms, while his 30 punchouts were good for fourth among Suffolk's staff.

Troio saved his best season for last. The senior designated hitter compiled a career season on a .333 batting average with 26 hits including seven doubles, for 19 RBI and 12 runs scored en route to the first all-league nod of his career with a spot on the second team.

Lee repeated as a third-team and all-defensive player pick. The senior captain from Flanders, New Jersey, upstaged his career campaign from a year ago by eight hits, outputting 40 on a .296 average with 19 RBI, 10 stolen bases and 32 runs scored.

Batchelder wrapped up his collegiate campaign on the all-defensive team. The feat is not only a first for the RHP, but marks the first time a Suffolk pitcher picked up accomplishment. The RHP from Shrewsbury, Massachusetts, put together a perfect fielding percentage on the bump over eight appearances and seven starts. Pitching wise, he tallied a 4.40 ERA over 43.0 frames of action and struck out 31 for a 5-1 ledger with three complete games. The senior captain also represented the Rams on the league's all-sportsmanship team, which was established to honor one player from each team in the conference for outstanding dedication to sportsmanship and for their portrayal of good sportsmanship, fair play and positive attitude.

After the conclusion of the tournament Sunday night, Parker Browne and Kevin Sinatra as GNAC All-Tournament team selections. Browne, a sophomore RHP, earned the shout out after shoving 2.0 scoreless, hitless innings with three strikeouts in the elimination contest against Johnson & Wales, while Sinatra threw a complete-game, six-hit, three-run (one earned), one-walk, five-strikeout effort in the semifinals versus Saint Joseph's (Maine).