WESTON, Mass. – Suffolk men's outdoor track & field had a historic weekend at the GNAC Championships as the Rams finished as a team for the first time in the events short, two-year history, while three student-athletes – Michael Balestra, Maytas Csiki-Fejer and Robert Solari – all grabbed home individual champion honors.

Csiki-Fejer highlighted the group as the freshman long distance runner became the first Suffolk runner – either male or female – to top two different events at the conference championship, taking home titles in the 800-meter and the 1500-meter run, respectively. Overall, the trio are the first-ever members of Suffolk men's track & field to garner GNAC Champion and all-league nod in program history. 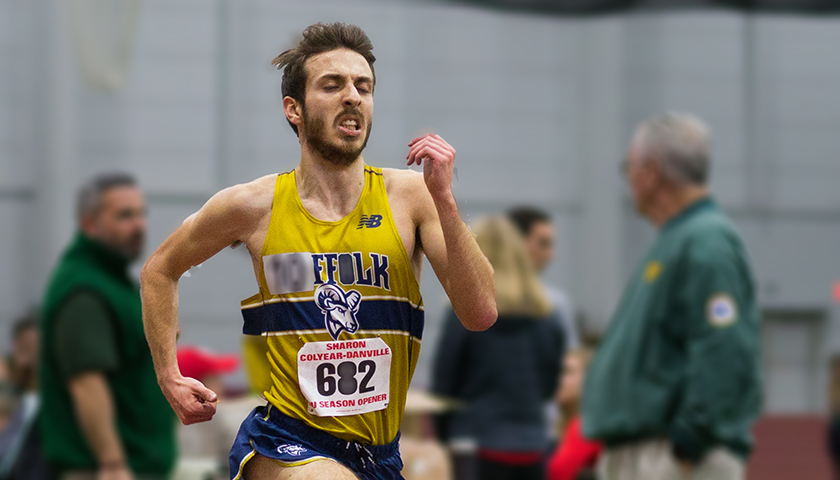 In the 1500-meter, the Saint Louis, Missouri native, clocked in at 4:02.23, nearly 19 seconds ahead of runner-up Jovan Sematimba of Regis, who set the conference championship record in the event as a sophomore in the inaugural event last year. Csiki-Fejer's time not only beat that record by 14.31 seconds, but marks the fastest time by the first-year runner in the event at the championships. Csiki-Fejer's classmates Hunter Toyoda (3rd, 4:22.97), Keoni Geers (6th, 4:28.64), Nick Malm (9th, 4:35.30) and Kevin Torres (10th, 4:39.62) all joined their classmate Csiki-Fejer in the 14-runner field and earned spots within the top 10.

Solari jumped his way to become an individual champ. In the high jump he cleared 1.80 meters to top his seven opponents. The East Bridgewater, Massachusetts, local was one of the most active Suffolk student-athletes at the tournament, completing in three other events in addition to the high jump. He participated in the long jump (5th, 5.82 M), javelin (5th, 36.82 M) and was the runner-up of the 400 behind a time of 53.26.

Justin Patten also competed in the 400 and completed his lap around the track in 56.42 to take seventh.

Balestra claimed his title in the hammer throw with a championship course record-setting throw of 46.64 meters. He also participated in the discus, which he took sixth, with a 31.16-meter toss.

Nicholas Nunez rounded out the Rams' runners in the 200-meter dash where he finished eighth behind a time of 25.49.

Suffolk will now send it's the Rams that qualified to the NCAA Division III New England Championships in Williamstown, Massachusetts, this weekend, May 4-6.