EAST BOSTON, Mass. – More than 140 guests, including all of the inductees, were in attendance last Wednesday, August 7, at the Hilton Garden Inn Logan Airport in Boston, as eight former student-athlete standouts were enshrined as part of the 2019 Great Northeast Athletic Conference (GNAC) Hall of Fame Class including Suffolk's own Michael Maguire.

After the Cadets' three-sport standout spoke and thanked the audience, Rivier President Sister Paula Buley, IHM, delivered a brief invocation prior to the dinner. Following the meal, the programming shifted to the introductions, video presentations, and speeches from each of the eight inductees.

Previously the NCAA Associate Director of Academic and Membership Affairs, current GNAC Assistant to the Commissioner Chris Brown introduced Guitian, while his predecessor at the conference office, Annie Jenkins, who is now the Assistant Director of Athletic Business Operations at UMass Lowell, welcomed Dufoe.

Also in attendance was GNAC men's basketball assignor Larry Last, as the conference would not be where it is without officials and referees for its 22 championship sports, as well as Tom O'Connor of Reading Trophy & Shirt, which has been the longtime GNAC awards provider for 15 years.

While last Wednesday marked the first-ever Hall of Fame dinner, the 2019 class was the third in the GNAC's rich Hall history. 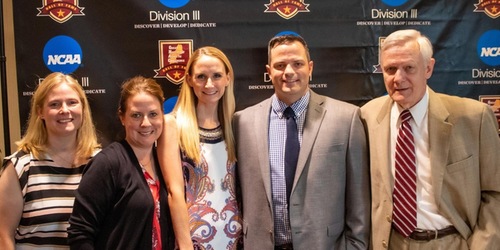