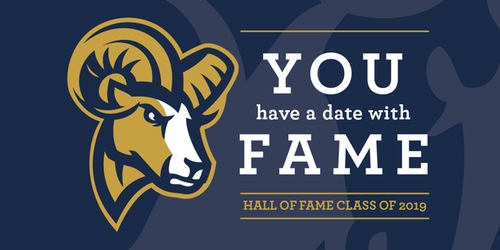 BOSTON – Prolific performers, record-setting Rams and stand-up supporters are the make-up of the eighth installment of the Suffolk University Hall of Fame, the Class of 2019, the Athletics Department announced Thursday morning.

The Class of 2019 will be honored in an appreciation dinner Friday, Oct. 25 at Suffolk University’s Sargent Hall Atrium and Function Room at 6:00 p.m. Tickets to the celebration can be purchased here.

“Induction ceremonies like the Suffolk Hall of Fame reveal the impact that Suffolk University as a whole and our athletic department in particular, has on the lives of people, including the chance to renew old acquaintances, and make new connections,” Director of Athletics Cary McConnell said. “This is an opportunity to honor truly exceptional athletes for their commitment to excellence and Suffolk University Athletics.”

The Suffolk Athletics Hall of Fame honors and perpetuates the memory of athletes, friends, coaches and supporters, which performed and contributed at the highest level of intercollegiate athletic competition, while at Suffolk University. Selection is based primarily on athletic accomplishments, integrity, sportsmanship and character. Individuals other than athletes may be named to the Hall of Fame in recognition of their services and dedication to Suffolk University’s athletic program. The inductees have been selected by a vote of a selection committee of Suffolk Athletics affiliates, including alumni and athletic administrators.

Among the members of the Class of 2019 is former minor leaguer Mike Romano and star outfielder Ralph Ferragamo. Playing in different decades, both of these former student-athletes made the Rams’ name known during their times in blue-and-gold and beyond.

Jennifer Harrington is the first-ever women’s volleyball player in Suffolk Athletics history to be enshrined, while Tommy Lynch, the first-ever all-region runner in the Rams’ cross country history, is the second from his sport to earn the recognition.

One of, if not the biggest threat to wear a Suffolk sweater on the blue line in men’s hockey history, Rick Piracini.

From the hardwood comes a pair of 1,000 point scorers; David Helberg and Kate (Librandi) Spear. Helberg was a scoring and rebounding machine with records in both categories, while Spear shot down the Rams’ opponents and built up the offense over her four-year career.

In the team category, the 2001-02 men’s basketball program sealed its place among the Rams greats as the first and only team to capture the Great Northeast Athletic Conference (GNAC) title to receive the league’s automatic bid to the NCAA Division III Tournament. Head Coach Dennis McHugh guided Suffolk to greatest that season with a roster full of future Hall of Famers including Jason Luisi, who was enshrined individually apart of Suffolk’s Class of 2015.

The members of the Class of 2019 of the Suffolk University Athletics Hall of Fame are:

Prior to the induction of the newest hall of fame class, the Athletic Department will also recognize the 2018-19 Charles Law Student-Athlete honoree, Emily Manfra of Suffolk’s women’s cross country and track & field programs. The recipient of this distinguished award is recognized in honor of the late Charles Law, whose work ethic and due diligence embodied what it means to be a student-athlete; excel both academically and athletically.

Manfra ran into the Rams’ record book, quite literally, as the first-ever Suffolk student-athlete to garner All-America status as a runner. She accomplished the feat in the mile at the 2019 NCAA Division III Indoor Championships, while also competing at the same stage in cross country and outdoor track & field, also a first for the program.

In addition to Suffolk’s Hall of Fame celebration Friday, Oct. 25, the University and Department will recognize the continuous philanthropy of Hall of Fame members Michael S. Smith, BSBA’61, and Larry E. Smith, BSBA’65, who funded the enhancements and upgrades to the Ridgeway Building, which took place over the summer.

“The Smiths’ legacy at Suffolk reaches far beyond Athletics, but their influence on the University’s teams and facilities is dramatic,” McConnell said. “Because of their thoughtful philanthropy the student-athlete experience at Suffolk has been greatly enhanced. Our student-athletes now call home to a newly renovated facility on Beacon Hill that features new locker rooms, training room, student-athlete lounge and team film room. They have changed the landscape forever for the Suffolk Athletic Department.”

For a more insider’s look on the 2019 Suffolk University Athletics Hall of Fame Class be on the lookout for the Hall of Fame series, which will be published on GoSuffolkRams.com leading up to the event. Specific publication dates on inductees are below: