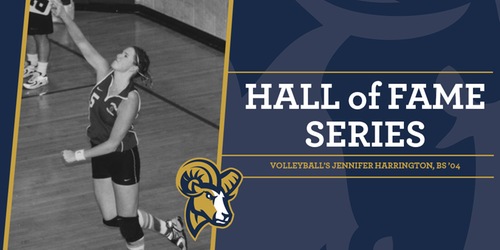 She is regarded as one of the best volleyball players the University has produced. The four-year letterwinner started every match of her collegiate career and left in 2003 as the all-time leader in kills per set with 3.23, a number that remains atop the list today.

Not only was she a threat on the attack, but became one to fear at the service line. As a senior, she polished 68 serves for a point, good for second on Suffolk's season annals.

Both career numbers, which appear in the Rams' record books, came her senior season in 2003. That year she garnered All-Great Northeast Athletic Conference (GNAC) first-team honors, one of just four student-athletes in the program's history to do so, by compiling 313 kills and a .170 attack percentage to go with 68 aces, 48 blocks and 127 digs making her the main ingredient to Suffolk's all-time winningest volleyball squad in the 20-plus year history of the program.

Although she saved her best season for last, the talented middle hitter was a productive team member from the first time she put on a Suffolk uniform. She is one of only a handful of Rams to say that she competed in four consecutive GNAC tournaments, helping the squad get to the quarterfinals in each of her years on the hardwood.

Additionally, during her time in Beacon Hill, she aided to 45 victories, to be a part of the winningest volleyball senior class at the time, a number which resides in the top five all-time.

In the spring as a freshman, Harrington traded her high top sneakers for cleats to compete with Suffolk's softball squad. On the diamond, the first baseman produced 18 hits including three doubles and one home on a .281 batting average to bring in 11 runs.

Harrington, a 2003 Suffolk University Athlete of the Year finalist, graduated in 2004 with a Bachelor's of Science in Personality Psychology. She currently works as a therapist at a substance abuse treatment center and resides in Bedford, New Hampshire, with her two children, Naomi (5) and Ricky (2).

The 2019 Suffolk University Athletics Hall of fame Induction Ceremony will be hold on Friday, Oct. 25 at Suffolk University's Sarget Hall Atrium and Function Room at 6:30 p.m. Tickets to the event can be purchased here.

For a more insider's look on the 2019 Suffolk University Athletics Hall of Fame Class be on the lookout for the Hall of Fame series, which will be published on GoSuffolkRams.com leading up to the event. Specific publication dates on inductees are below: