Trustee Mark Sullivan’s $250,000 gift supports education at the nexus of business and IP

When audio giant Bose Corporation introduces a new product, says the company’s retired chief legal officer, Mark Sullivan JD’79, engineers from some competing companies have been known to take the product apart and study it, piece by piece, to understand the innovations housed within. 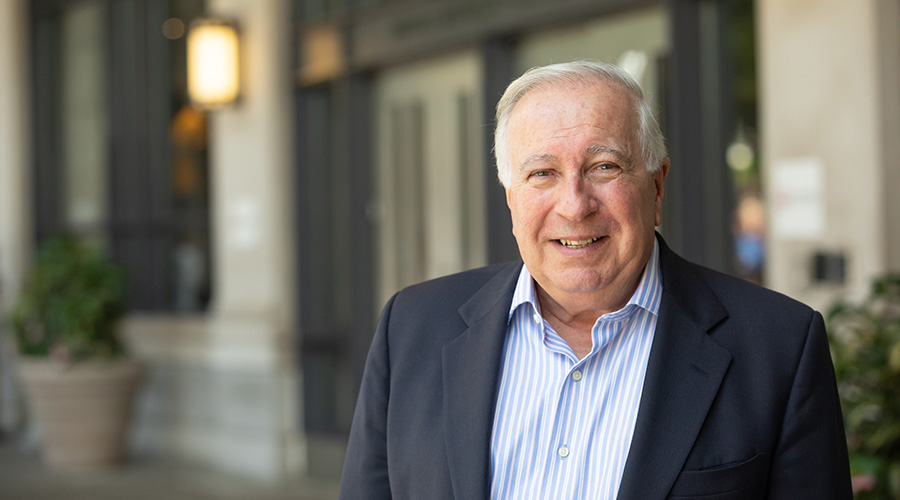 It’s not hyperbole on Sullivan’s part. Bose is known for disruptive innovations, including noise-canceling headphones, audio speakers designed for a specific car’s cabin acoustics, and small, easy-to-hang cube speakers that produce big-speaker sound. Sullivan was tasked with protecting all that ingenuity.

In the late 1990s, he and his team wrested $8.2 million in patent infringement and legal damages from JBL, a division of Harman Kardon. Over the decades, Sullivan regularly faced the challenge of knock-offs of patented Bose technologies.

In 2016, after 35 years at Bose, Sullivan retired from that prestigious job and its directive “to protect the lifeblood of the company, Bose technological advancements, and to bring Bose’s innovative products to customers throughout the world.”

His career at the company began with accounting and tax law and then grew to include a wide range of legal issues, including negotiating manufacturing and sales deals with government officials around the globe and a stream of patent and counterfeiting issues.

While Sullivan is quick to deflect attention from himself—and not in the “humble brag” manner common these days—some quick research shows his years at Bose were marked by growth, both for those around him and for the company as a whole. During his tenure, the company’s sales revenue shot up from $50 million to approximately $4 billion. The legal department grew from a one-man operation, Sullivan, to 28 lawyers, including six based in Europe and Asia.

“They don’t have to be engineers”

The evolution of his career helped him better understand a critical nexus: IP law, business investment, and innovation. Sullivan, who serves as Vice Chair of Suffolk’s Board of Trustees, has donated $250,000 to the Law School with an eye toward creating a growing cohort of graduates who are “comfortable and conversant in IP—and able to speak intelligently with engineers, entrepreneurs, and investors.”

“They don’t have to be engineers themselves,” he adds, “but they do need some broad knowledge about how innovations and trademarks are protected.” That know-how will give students a leg up in the job market. He says: “The need for IP knowledge is spreading to so many areas of the law, and it’s where a lot of the financial investment is made.”

How to hinder counterfeiting?

One example of the importance of protecting IP, he says, was figuring out how to get Bose’s products into the massive Asian market without a huge loss from counterfeiting or crippling customs duties. Over the years, it had become abundantly clear that protecting innovations would be near impossible to manage in China.

The solution? Producing products at a new Bose plant in Malaysia, a country known for its strong legal system based on English common law and its low tariff arrangement with the Chinese government.

A lesson from Shark Tank

The value of IP knowledge, while oversimplified, is underscored on national television, Sullivan says, on shows like Shark Tank, in which famous investors bombard entrepreneurs with questions about patents and trademark protection. The entrepreneurs quickly come to understand that they generally can’t get funding if their ideas can’t be protected.

Suffolk is known for its sizable footprint in patent law, and Sullivan notes that the school’s graduates make up 30% of the top IP firm patent partners in Greater Boston—and its IP concentration and downtown location make it ideal for law students to land internships with corporations and startups.

Sullivan, who grew up in Roslindale, Mass., and attended Boston public schools, says of Suffolk: “It’s a school with a working-class heart, great teachers, and a unique, we’ll-get-through this-together camaraderie among the students. I wouldn’t be where I am today without my Suffolk legal education.

“The school gave me the opportunity to combine business and legal skill, which was critical to my career trajectory. I had great faculty teaching me corporations, agency, a host of tax law courses.

“But it’s been a long time since I graduated,” Sullivan adds. “Each decade brings its own wrinkle in terms of the combination of knowledge and experience you need to succeed as a lawyer. For many new graduates, they’ll need to operate comfortably in the innovation economy. Suffolk Law can help them get ahead in an economy that cycles new products in months versus years.”