As both a judge and an adjunct instructor at Suffolk Law School, Serge Georges, Jr., JD'96 has earned a reputation for treating everyone with dignity and respect.

He's been called a rock star. A fantastic judge. A great mentor. A wonderful teacher.

Now Serge Georges, Jr., JD'96, will be called something else: associate justice of the Massachusetts Supreme Judicial Court.

A member of the Boston Municipal Court since 2013 and an adjunct professor at Suffolk Law since 1999, Judge Georges was nominated to the state's highest court by Massachusetts Governor Charlie Baker in November. In early December, he was unanimously confirmed by the Governor's Council.

The governor has praised Georges not only for his legal brilliance, but also for the humanity he brings to his work as both a judge and a teacher. "Many lawyers say he's their favorite judge," Baker said in a State House news conference. "Not because he gives them the answer they want, but because he knows the law, does his homework, and treats everyone in his courtroom with dignity and respect."

Baker also singled out Georges' work at Suffolk, where the judge has taught courses in evidence, trial advocacy, professional responsibility, and the rules of civil practice and procedure.

"Student surveys make clear that he is one of their favorites," Baker said. "And he is equally admired and respected by his colleagues on the faculty for his ability to turn legal and procedural theory into real-life practice in the classroom for students."

After he is sworn in, Georges will become the third Suffolk Law graduate currently serving on the seven-member court, joining Justices Frank Gaziano, JD'89, and Elspeth Cypher, JD'86. He will also become just the fourth Black person ever to be appointed to the 328-year-old SJC.

Andrew Perlman, dean of Suffolk Law, described Georges as a "simply outstanding judge," someone who will offer the SJC "a sharp analytical mind, an invaluable perspective, an exceptional talent for communicating effectively, and a longstanding commitment to public service."

Dean Perlman added that Georges' tenure on the Boston Municipal Court will provide "an often under-represented perspective" for the Supreme Judicial Court, whose members are rarely drawn from the district and municipal courts. "His professional experiences, particularly those involving the civil and criminal legal issues that individuals regularly encounter, will be especially valuable to the court," he said.

Prior to accepting his nomination to the Supreme Judicial Court, Judge Georges accepted another honor: Suffolk's invitation to serve as Commencement speaker for Suffolk Law's Class of 2021, where he will receive an honorary degree.

University President Marisa Kelly called Georges "a role model for our students, someone who embodies our very highest ideals. And in a period when our country is wrestling with criminal justice reform, he brings a deep understanding of how different communities navigate our legal system."

Added Dean Perlman: "I have such enormous respect for Judge Georges as a person. I hope our graduates will embrace the values that he so clearly holds." 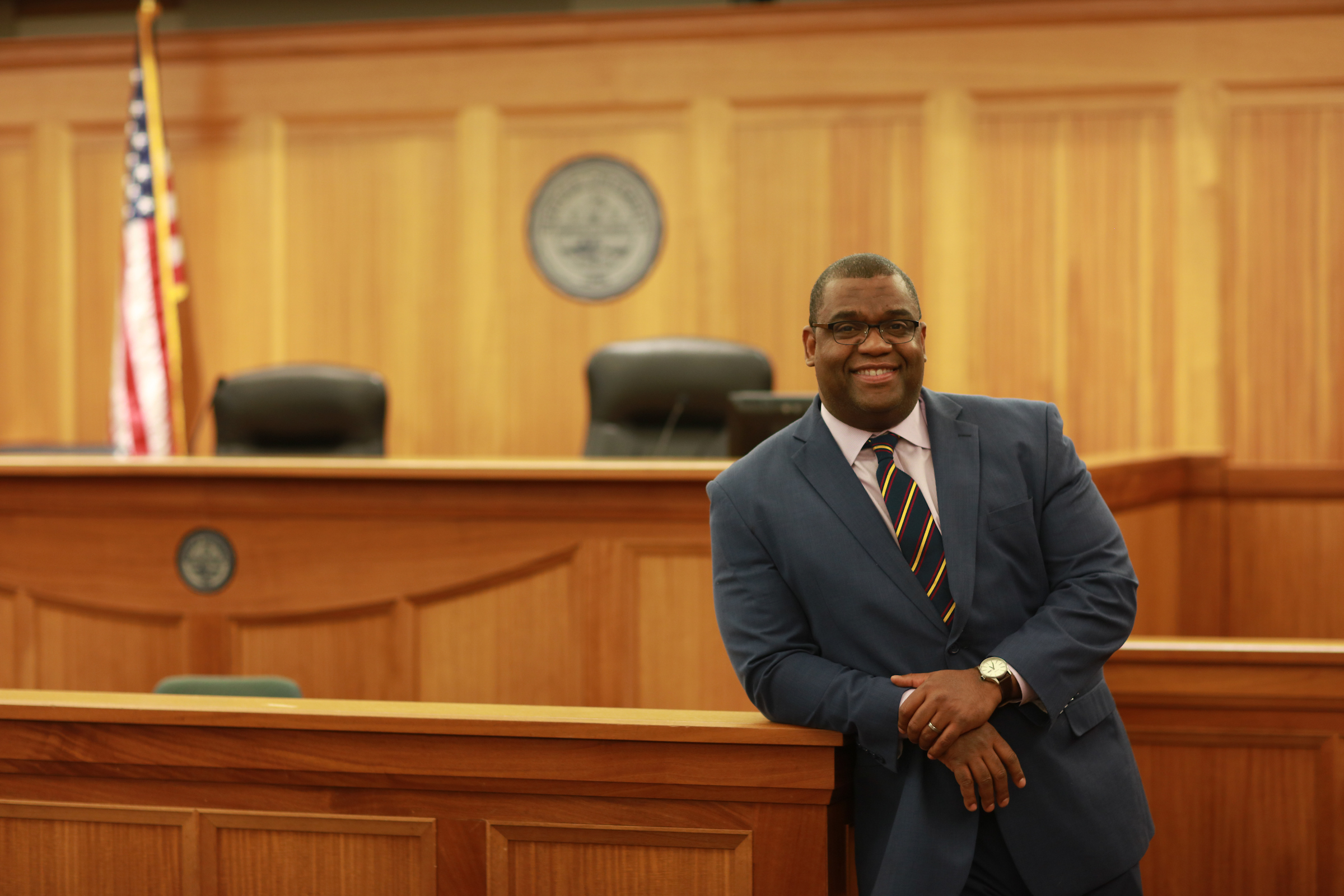 At the November press conference, Judge Georges summed up his judicial philosophy this way. "When you are practicing at the district and municipal court level, [you see that] there are plenty of people who have just made mistakes and need some guidance to get back on their feet, stop committing crimes, and become productive members of society. I try to give people the opportunity to be successful."

The son of Haitian immigrants, Georges grew up in a two-bedroom apartment in Dorchester. His parents held down multiple jobs so they could send their three children to Catholic schools. Georges graduated from both Boston College High School and Boston College, where he earned a degree in English.

After earning his law degree from Suffolk in 1996, Georges worked in private practice, concentrating in civil litigation, criminal defense, and professional licensure and liability. He became a partner at Barron Stadfeld, P.C., as well as an associate at Todd Weld, LLP and Rackemann, Sawyer Brewster, P.C. He also served as president of the Massachusetts Black Lawyers Association. In 2013, Governor Deval Patrick appointed him to the Boston Municipal Court. He presided over the Boston Municipal Drug Court from 2014 to 2018.