Whether she’s volunteering at the New England Aquarium or researching endangered reptiles, biology major Tatiana Vasquez has a way with animals. 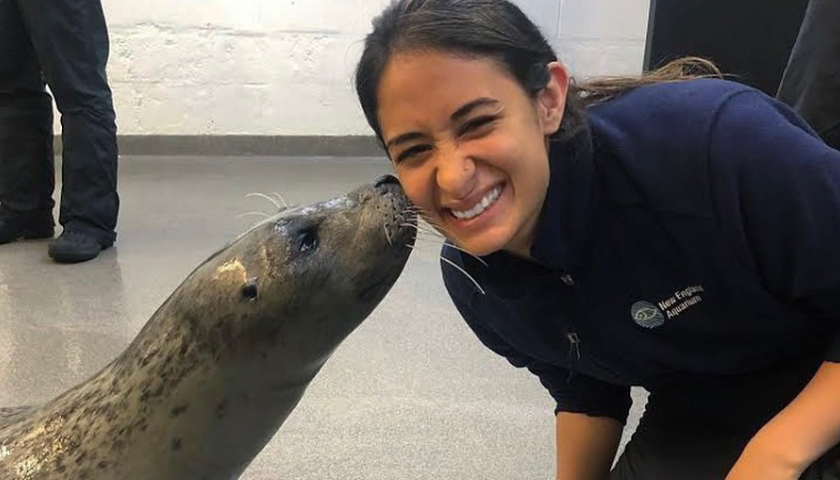 Tatiana Vasquez found her happy place in an unlikely spot: Standing in a large tank of salt water, holding a bucket of fish.

She made that discovery during the fall 2019 semester when she began volunteering at the New England Aquarium, one of Boston’s best-known and loved attractions. Working with the aquarium’s Marine Mammal Department, the biology major spent the next year and a half helping to feed, train, and care for fur seals, harbor seals, and sea lions.

“It was such a cool experience that not many people get to do,” says Vasquez, Class of 2022. “I learned what it takes to be an animal care worker, and everything that goes into maintaining the health and happiness of animals in captivity.”

Working one-on-one with the seals, she was struck by their intelligence and distinctive personalities. She says they renewed her determination to “help spread awareness about conservation efforts to better protect the planet.”

Vasquez also had to make presentations to large groups of visitors, answering questions on the spot from people of all ages—a useful skill for someone who plans to make a career in the sciences.

“A really important part of your career is being able to explain your findings to other people,” she says. “Whether I was explaining some very science-intense topics like ocean acidification and the dangers of microplastics, or simpler things like why seals swim upside down sometimes, it was great practice for me for the future.”

Vasquez is taking other steps to prepare for her future. During the spring 2020 semester, when the aquarium was closed due to the pandemic, she assisted Biology Professor Eugenia Gold on a research project on the endangered Indian gharial. She studied the bite force of the crocodilian reptile, which has a distinctive, needle-nosed snout and rows of interlocking teeth, earning praise from Gold for her swift, high-quality work.

“Tatiana is self-motivated, driven, and always looking for the next steps in the process,” says the assistant professor. “She knows what she wants and where she wants to go, and she is willing to put in the effort—in and outside of the classroom—to get the experience she needs to become successful.”

Vasquez will have more opportunities for research, thanks to Suffolk’s McNair Scholars Program, whose mission is to help low-income, first-generation, and underrepresented students prepare for doctoral degree programs. The federally funded program gives students like Vasquez the chance to participate in significant research projects.

“Working with Professor Gold gave me a lot of confidence in my work,” she says. “It proved that I made the right choice to major in biology.”