In a time of unparalleled isolation, Suffolk theatre students and alumni writer-director Nael Nacer created an award-winning play about the power of connection. 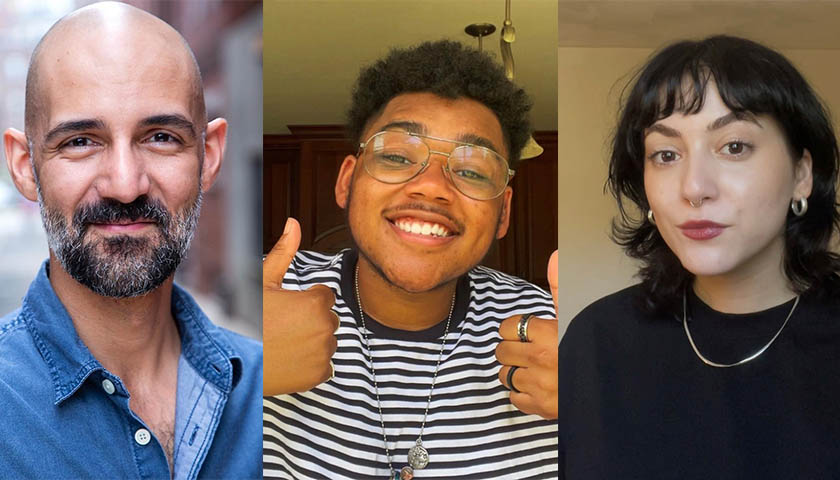 A few months into the pandemic, Nael Nacer, BA ’06, a highly regarded member of the Boston theatre community, had a vision.

What if I create a play, he thought, that would bring Suffolk students together in a positive and uplifting way during this unprecedented time? The play would have to be produced on Zoom instead of onstage, but Nacer believed it could work “if everyone was all in.”

Starting in mid-September 2020, Nacer and his nearly 40-member student cast and crew — some of whom were living abroad — spent the next seven weeks “creating, devising, and developing” the online production together, which they live-streamed in late October.

In late May, the Suffolk Theatre Department’s production of “To Gather Apart,” a comic drama about creating relationships in a virtual world, captured national recognition at the 2021 Kennedy Center American College Theatre Festival, earning a Citizen Artist Award as well as special achievement honors for a company-generated work.

“It’s amazing what we accomplished in such a short period of time,” says Nacer. “The students were so receptive to a new idea, and they gave 100% to make this happen.”

Making theatre in, and for, a digital world

Nacer credits two key factors for the play’s success: Treating Zoom theatre as its own new medium, and “addressing the special moment of being in the pandemic and finding a meaningful connection among strangers in a time of unparalleled isolation.”

“Although COVID-19 was the elephant in the room,” he says, “students discussed many topics during each Zoom session, including theatre, school, family, and relationships. They were like a support group for one another.”

Douglass and Bolkwadze, both theatre majors, each turned in award-winning performances but in completely different roles. Overwhelmed by the pandemic, Bolkwadze’s character, Melis, was angry and antisocial, while Douglass’ character, Zachary, got along with everyone and never lost his sense of humor.

“Zachary could light up a room,” says Nacer, “while Melis would go to some dark places.”

Bolkwadze, who hopes to run her own theatre company one day, says the play taught her to trust her castmates. “This was a very vulnerable and powerful show, so I knew that we needed to communicate with one another in order to survive as a community.”

“I learned how important it is to keep an open mind and to listen and support other people,” adds Douglass. “And over Zoom, I also learned how to act more with my face than with my body. I was the actual performer — with no stage, no lights, no live audience.”

Marilyn Plotkins, outgoing chair of the Theatre Department, praised Nacer, video designer Kathy Wittman, and the student cast and crew for making “To Gather Apart” a glimpse of what theatre can become in a digital world.

“Not only was the play an artistic and technological triumph,” she says, “but more importantly, the students reported how closely their experience of the pandemic aligned with the heart of the show — the need for connection.

“Everyone demonstrated exemplary courage, passion, and a wonderful sense of invention. I believe that the show became a lifeline for many of them.”