On the Road to Med School 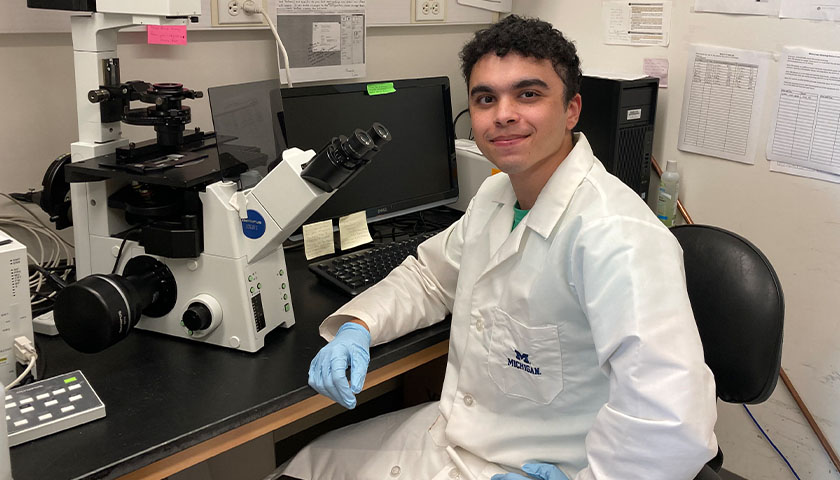 It was his first visit to Suffolk’s campus in 2017 when Olukemi (Kemi) Akinleye, BS ’21 — then a high school senior — honed in on the kind of premed training he wanted to pursue.

A tour of the Biology Department and meetings with faculty were so compelling, he left that day knowing exactly where he wanted to attend college.

“I got the chance to sit in a lab and talk with some professors who were so passionate about what they were teaching,” says Akinleye. “After asking them some questions, I felt Suffolk is a place where, if you take the initiative, you can accomplish a lot.”

Flash forward a few years, and Akinleye was conducting research in those same labs. As a biochemistry major at Suffolk, he had the opportunity to collaborate with the department’s director, Professor Melanie Berkmen, on a series of research projects funded by the National Science Foundation.

“She not only helped me train my hand and bench skills in the lab, but she also helped me learn what it takes to make and troubleshoot procedures,” says Akinleye, who became president of the student-run Biochemistry Club in his senior year. “By the end of my time working with her, I learned how to do independent research, plan and carry out experiments, and make presentations.”

One of their more intriguing projects explored bacterial mating, in which bacteria are able to exchange genes. “Kemi’s work was very exploratory and took a lot of twists and turns,” says Berkmen. “He had to invent new methods to answer some questions, which is actually a graduate level task.”

His research was significant enough to earn him an invitation to speak on bacterial mating at the national meeting of the American Society of Biochemistry and Molecular Biology.

Akinleye is now continuing his journey to medical school in the general surgery department of the University of Michigan Hospital, working as a research technician. There he’s responsible for collecting and processing fat tissue and conducting experiments to determine how diseases like type 2 diabetes affect the function of fat.

His research is aimed at better understanding insulin resistance, glucose metabolism, and extracellular matrix cell regulation to help people affected by diabetes and obesity.
In addition to his full-time job, Akinleye is studying hard for the MCAT, which he plans to take next year. His goal: To work in emergency medicine as a trauma surgeon.

Says Berkmen: “I have no doubt that Kemi will be successful in all his future endeavors — whether being a fantastic researcher, or becoming an amazing healthcare professional.”