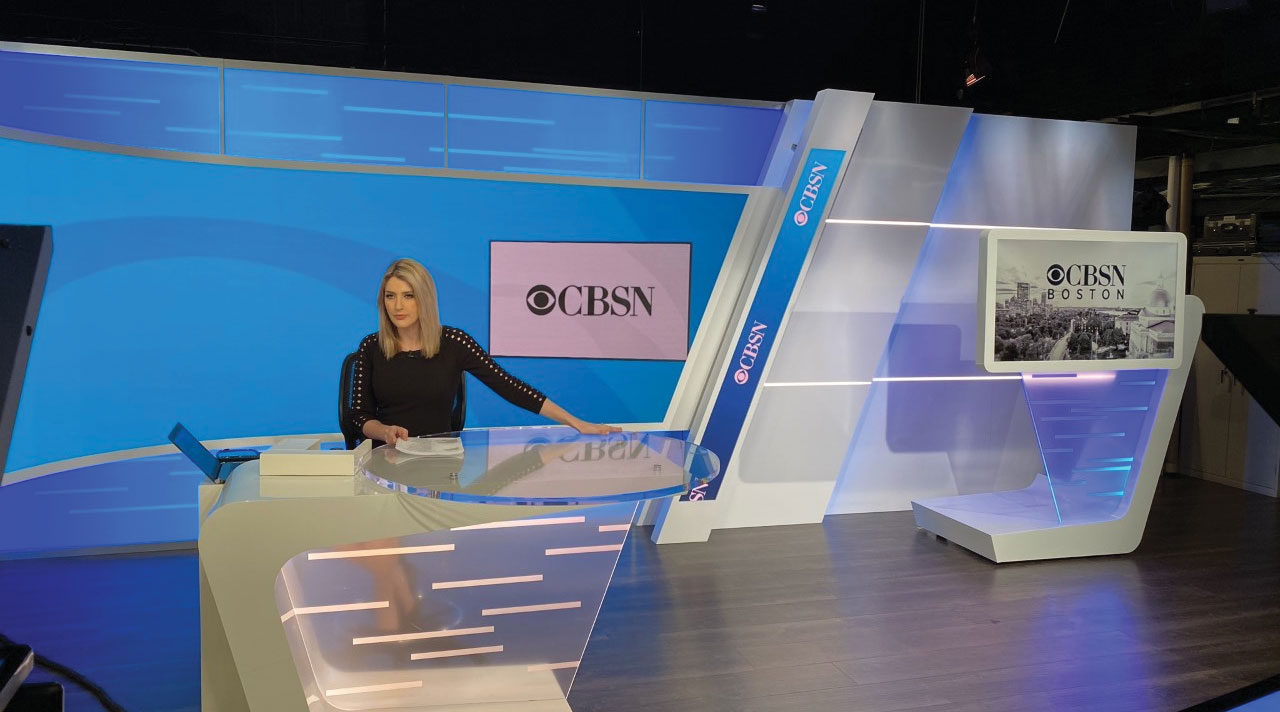 At a moment’s notice, Breana Pitts stepped onto the CBSN anchor desk to cover national news as the coronavirus was breaking in March.

Half past 2 in the morning is a wretched time to wake up for work.

But Breana Pitts, BA ’12, is used to starting her day when other people her age—at least prior to the pandemic—are just coming back from karaoke night at the Wild Rover.

That’s because for almost four years Pitts has been the traffic and news reporter for the morning news broadcast on Boston’s WBZ-TV. Getting into the office by 3:30 a.m. has become almost routine. Drive to the studios from the South Shore. Do hair and makeup. Keep an eye on how messed up the Expressway is getting. Report 14 traffic updates throughout the morning until 7 a.m.

Like an understudy on opening night when the star breaks a leg, Pitts got the call … or in this case an email. It was from her producer, saying that CBS headquarters in New York had been shuttered overnight after two employees tested positive for the coronavirus. That left the network unable to broadcast anything from on site.

Pitts’ producer told her that, after finishing her local broadcast, she’d start anchoring CBSN, the network’s 24-hour worldwide streaming news service. Not just for Boston but for the whole country. All morning long. Indefinitely.

Pitts was already familiar with CBSN. She’s been anchoring the 7-8 a.m. Boston feed since its launch in the fall of 2019. But like William Hurt’s character Tom Grunick in Broadcast News, she was going national during a major crisis.

Instead of anchoring stories about Tom Brady’s impending free agency and breakdowns on the T, she would be on the air interacting with White House correspondents, doing talkbacks with financial experts on Wall Street, and juggling pressers from Governor Cuomo and President Trump.

“My whole workflow completely changed,” says Pitts of her time anchoring the national desk. “It’s definitely been a positive experience even though it flipped my life upside down.”

Pitts didn’t come to Suffolk yearning to be the next Christiane Amanpour. In fact, the only reason she ended up in the University’s TV studio in the first place was because it had an open work-study position and Pitts needed a job to maintain her financial aid. But she quickly got interested in what was happening in the studio and started taking classes to learn how cameras work and what journalists do.

“I fell in love with something I just stumbled on,” recalls Pitts.

She started doing reports for “Suffolk in the City,” a weekly segment on New England Cable News. Broadcasting from Suffolk’s Studio 73—the camera gets set up right on Tremont Street—“Suffolk in the City” has for 10 years given Suffolk students on-air reporting experience. Pitts still recalls getting “wicked nervous, deer in the headlights” during her first live segment for the show.

Despite the rocky first outing, Pitts quickly caught the bug and ended up majoring in broadcast journalism. After graduation, she worked at a Boston TV station and then landed a job at KTSMTV in El Paso, Texas, where she was a multimedia journalist and on-air anchor. Being in the “anything can happen” environment of local TV newsrooms was essential preparation for her new role with CBSN.

“Once you do more and more live shots and become more confident in yourself as a journalist and how you write and how you present, it becomes easier every time,” says Pitts. “When they said I was doing the national broadcast for CBSN, it’s kind of like, ‘Let me throw on my hair curlers and put in my eyelash extensions and let’s do the damn thing.’ You don’t have time to think about it too much. You can’t be a planner,” Pitts laughs.

Pitts’ stepping up to handle the CBSN national news was unexpected. But it isn’t surprising, according to Jerry Glendye, Suffolk TV Studio Manager, who advised Pitts when she was a student, helping her hone her skills and develop her on-air talents.

“She’s made herself a jack-of-all-trades, and that’s why CBS trusts her,” says Glendye. “She has the chops and experience to do it.”

Back at the WBZ studios, Pitts has a few minutes to check her email, grab a sip of coffee, and chat with her producer. Then it’s back on the air. Governor Cuomo has a press conference in three minutes.

Once you do more and more live shots and become more confident in yourself as a journalist and how you write and how you present, it becomes easier every time.”