The World is Their Gallery

Students, faculty, and alumni take their art into the public realm 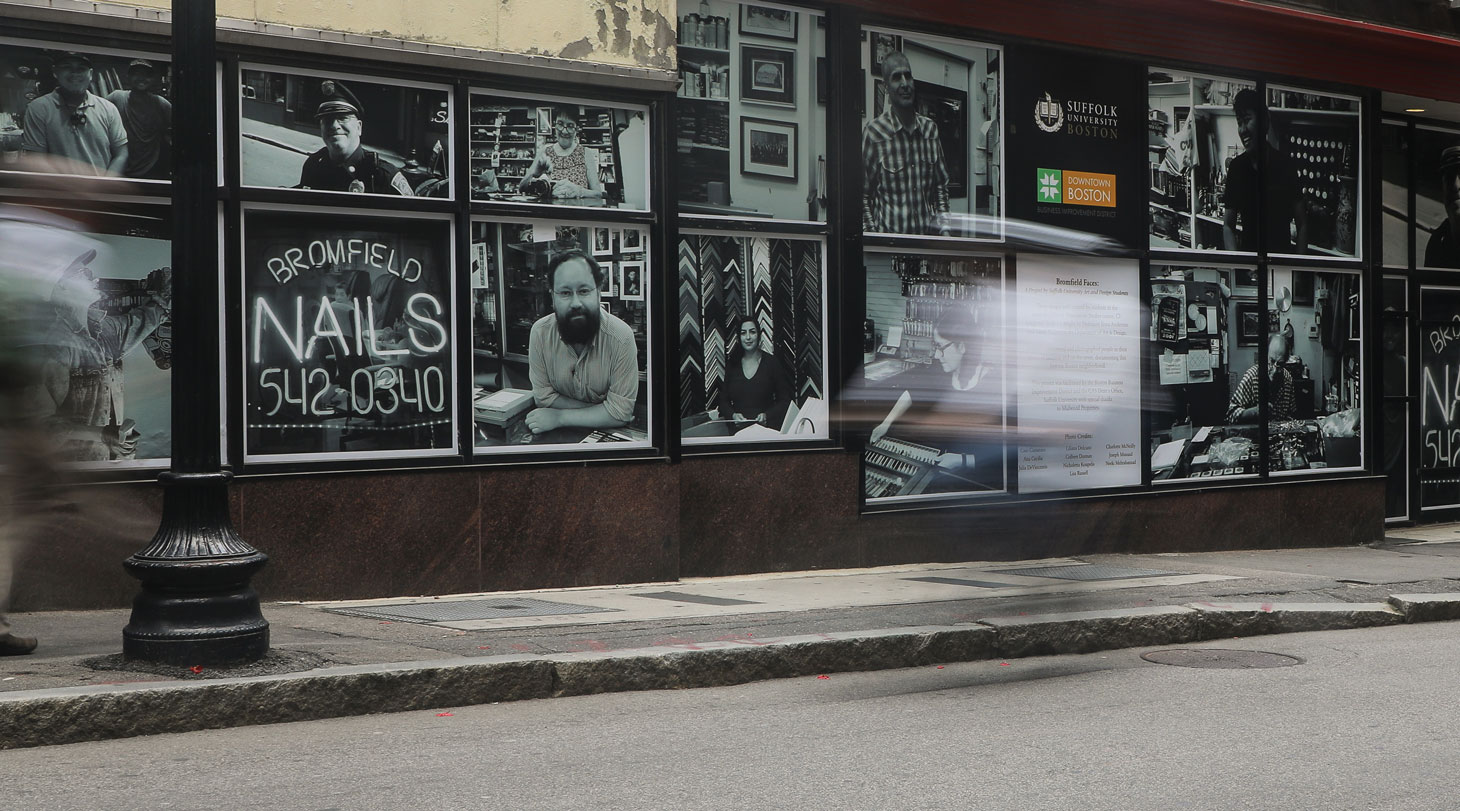 Public art is hardly a new concept. Monuments to civic leaders, athletes, and religious figures date back to antiquity, with much surviving statuary now moved from the public square into museum collections worldwide. Yet more than statues survive.

While graffiti may seem like a modern approach to public art, there is ancient gang tagging on Egyptian pyramids, erotica in Greece, and political inscriptions in China. And for centuries people have marveled at sites like Stonehenge, which is fascinating to behold while offering clues to the history of a place and time.

In a similar fashion Suffolk faculty, students, and alumni are leaving their own imprints on the world around them by creating and analyzing public art in Boston and beyond.

How to bring artwork out of the gallery and into the community is something many artists think about, according to Art Professor Linda Brown, who collaborated with the Downtown Boston Business Improvement District to bring larger-than-life portraits to an empty storefront near Suffolk’s downtown campus. “Suffolk students are learning this concept from day one.”

Art Professors Susan Nichter and Ilona Anderson joined Brown’s effort through a skills-based assignment that had students photographing and interviewing owners and employees of the small businesses lining Bromfield Street, where the photos later appeared.

“I love that the real-world experience is tied to thinking about visual literacy,” says Nichter, who has another student public art project on the drawing board based on the theme Unique to Boston, Living Images. It will feature moving images in four bays of a Washington Street storefront.

“To have something out in the world, to see it be accepted and used—loved, even—provides some of the best joy available,” says Caio Cassarino, Class of 2021, whose black-and-white portrait of Farid Goljamali is part of the photo collage opposite the businessman’s King Frame shop.

In addition to the thrill of having his work in the public realm, Cassarino, a first-year student when he took part in the photo project, says it was helpful for him to muster up the courage to approach his subjects.

“Those interactions in a way helped me learn how to better be part of my immediate world; a stepping-stone to improving my social interaction,” says Cassarino, a graphic design major and arts management minor. 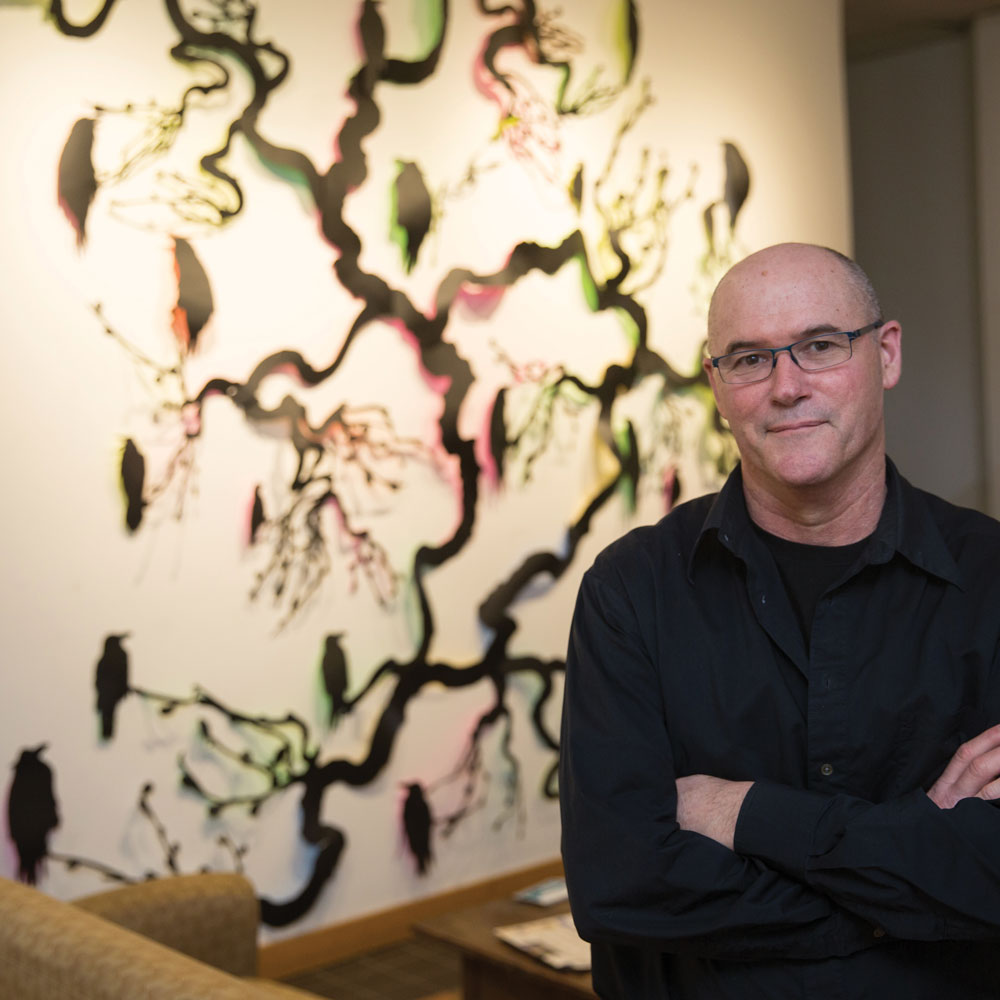 Randall Thurston and rendering of his artwork to appear at the Massachusetts Bay Transportation Authority Lechmere Green Line station. 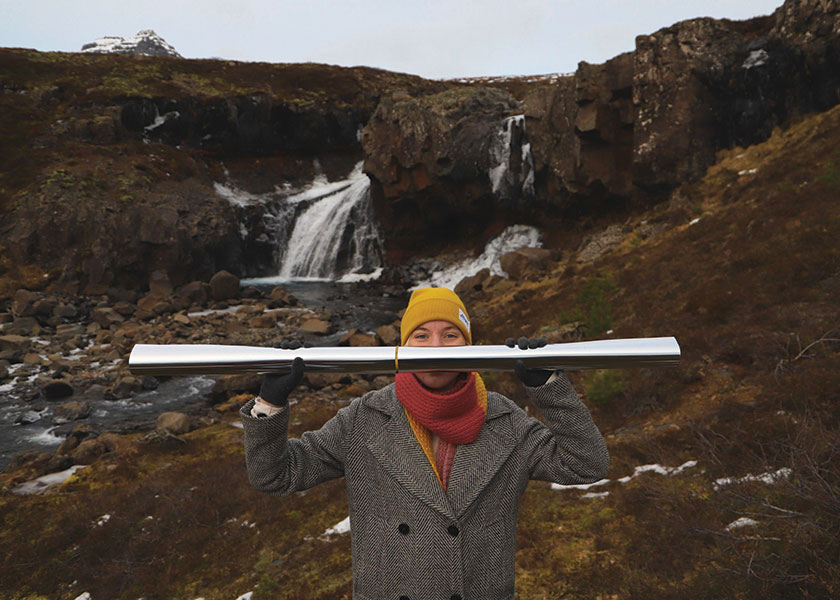 Bottom of page: While in residency at Fish Factory Creative Center in Stö›varfjör›ur, Iceland, a remote fishing village on the east side of the island, Elle DioGuardi collaborated with another resident to create this polished aluminum display with a familiar Magic 8 Ball saying. Above DioGuardi is pictured with an installation which she later displayed over a waterfall.

An urban transit station might be the last place a commuter would expect to find reminders of the natural world, but images of soaring birds and plant life will greet them when they enter the new Massachusetts Bay Transportation Authority Lechmere Green Line station opening in 2021.

Silhouettes of birds in flight are embedded in the glass housing the station’s elevators, and wayfinding signs include images inspired by the grasses and other life that once thrived on a site now given over to a railbed and trolley cars.

“Public art, when done well, can be uplifting,” says Art Professor Randal Thurston, who took into account a commuter’s experience and the site’s natural history in creating the station’s artwork. Thurston’s design is inspired by the greenery of a river that once flowed through the area, the tides, and the birds that migrate through in patterns as predictable as the daily commute.

“I know what it’s like to spend 20 minutes looking at the station surroundings, so I wanted to create something that people can come back to over and over again,” says Thurston, who often commutes to Suffolk University through Lechmere.

For Thurston, creating art for a public space involves comprehensive research and observation, the consideration of how people will interact with the artwork, computer models, drawings—and flexibility. After his concept was chosen from among 100 artists’ bids, reconsideration of the transit project’s budget threatened the public art, though eventually it was restored on a smaller scale.

“I learned the importance of adaptability in creativity,” he says in light of the T’s decision to scale back from an enclosed glass-and-metal station to the open-air platform approaches and signage of today.

It was a slideshow of Thurston’s public artworks that helped steer Elle DioGuardi, BFA ’15, to creating work in public spaces.

“It was an ‘Aha, you can do that’ moment for me,” says DioGuardi. “Public art is my favorite kind of art and the kind I want to look at. Seeing his work and listening to the thought process of a person I know and trust and can ask questions of provided inspiration.”

Having grown up in Chicago, DioGuardi has seen the power of public art and her preferred medium—reflective material—through the throngs that gather around Cloud Gate by Anish Kapoor, nicknamed “The Bean,” a monumental metallic sculpture in busy Millennium Park.

“I love the way people are drawn to it,” she says. “I always like to think of art in terms of the viewer. That’s a huge part of why I use a lot of reflective material.”

DioGuardi, who has furthered her artistic vision through artist residencies in Iceland, Spain, and Virginia, uses text and, often, reflections “to interrupt the day-to-day and how we see a mirror, building, or landscape.”

Sometimes it takes subterfuge to put her work into the public sphere.

“I like to do text on bathroom mirrors in public places,” particularly in museums, which have well-designed restrooms, says DioGuardi, who chuckles and adds: “Then I can say I have work in a museum.”

“I’m not an artist but enjoy and appreciate art,” says Ruth Prakasam, whose first-year writing courses in fall 2019 focused on identifying Boston problems and finding solutions based in public art.

To get more children interested in visiting Boston’s Museum of Fine Arts, a group of students in Prakasam’s Mass. Art for the Public writing class created a graphic novel with artist John Singer Sargent as a character.

Other students who had played youth sports wrote a grant for a series of artworks celebrating neighborhood sports teams to “be made by artists, but designed and imagined by the children on the team,” according to their proposal. And yet another created a website showing where to discover art in Boston—from dance to sculpture and more.

The class visited the Suffolk art gallery and discussed the purpose of the University’s exhibition space; they agreed that colleges and universities should show support for art by maintaining an art gallery or museum. Smaller writing assignments sent students into Boston neighborhoods to view artwork, and readings and discussions centered on aspects of public art.

When Prakasam posed the question “What is art?” her students suggested the definition of art should be broad, without borders or boundaries.

And, increasingly, the artworks that are capturing the public imagination in Greater Boston and beyond originated within the Suffolk community.