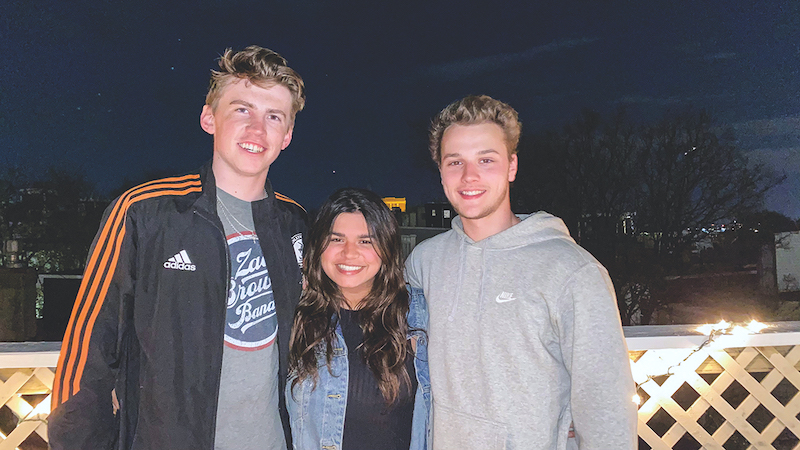 As a child traveling the globe with her parents, Emmie Daswani was struck by “seeing so much sadness and hurt in the world.” She vowed that one day she would find a way to help people in need.

Now, Daswani, Class of 2024, and two longtime friends, Garret Roberts of UMass Lowell and Adrian Deli Coli of Dalhousie University in Nova Scotia, have created the Concept Project to challenge people to do good by taking part in mental and physical challenges while raising awareness and funds for social causes.

“Essentially, our goal is to become a platform company that can be used for doing good,” says Daswani, an entrepreneurship major. “Almost like an Uber for ideas.”

Their first project was a four-day, 150-kilometer walk through Nova Scotia last year, led by Deli Coli, to honor the memories of 22 people killed in a mass shooting there earlier in the year. They raised $10,000 for a scholarship fund for families of the victims. Daswani and her team—which now includes a number of Suffolk students—have organized the 120-mile Highs and Lows Walk to raise funds for the New Hampshire chapter of the National Alliance on Mental Illness, and plunged into freezing Boston Harbor this March as part of a unique clothing drive called Jump, Wash, Donate.

“We raised more awareness than we ever thought we could,” Daswani says. “We believe that everyone wants to do good. And when you make it a challenge and give them the opportunity, they will.”