Taking Poe to the Beyond

Edgar Allan Poe’s stories demonstrate his mastery of emotional manipulation, so what better way to convey the drama of his life and work than through puppetry, masks, and Noh Theatre?

Theatre Professor Wesley Savick has written and directed a play that incorporates all three: Loss of Breath: The Unfinished Life and Death of Edgar Allan Poe, to be presented Nov. 15-18 at Suffolk’s Modern Theatre.

It’s a play unlike any other that will elicit laughter, tears, and total confusion—in a fascinating way.

Savick creates an extravagant world between life and death from Poe’s stories and biography. The play covers events from his life, and the people surrounding the author, his relationship with his wife, and her death.

It also touches on some of Poe’s famous works including “Loss of Breath” and “The Masque of the Red Death”. 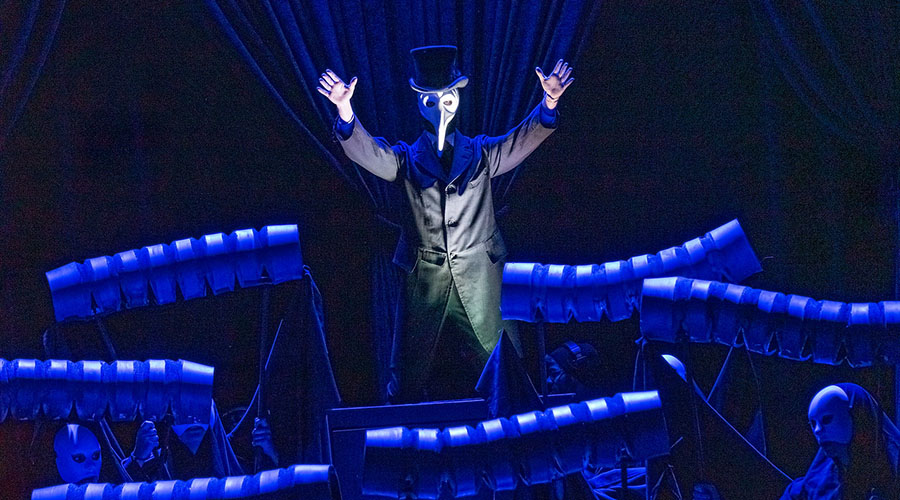 “Some people have never used puppets that take up their whole body,” says Jacob Marino, Class of 2019, assistant director of Act 2. “The puppets are as much a character as the human is."

Act 2 is derived from Noh Theatre, a Japanese art form that focuses on storytelling through appearance and movement. It touches on Poe and what may have happened after his death.

“Everything from the variety of puppets to the Noh Theatre aspect will be so different from anything most of this audience has ever seen,” says stage manager Grace Libby, Class of 2019.

The two drastically different acts meld together to create a unique theatrical experience.

“It is so amazing and involved, and it evokes all the emotions. If the audience enjoys watching it even half as much as I enjoyed stage managing it, it surely will be a success,” says Libby.

Suffolk Theatre is a student-centered department, where students write, direct, and design original plays and intern with leading theater companies, both at the University’s Modern Theatre and at organizations throughout the United States and in London.

“I love doing theater at Suffolk because the students and faculty alike are so supportive of the creative process. We all really want to see each other succeed and we're given the space to grow and develop as courageous, inventive artists here,” says actress Jamie Steinbach, Class of 2019.

“It’s such a supportive and loving community of hilarious, wonderful, and talented people who I feel very lucky to call my friends,” says Libby.