Literature encourages dialogue that hits home for many students 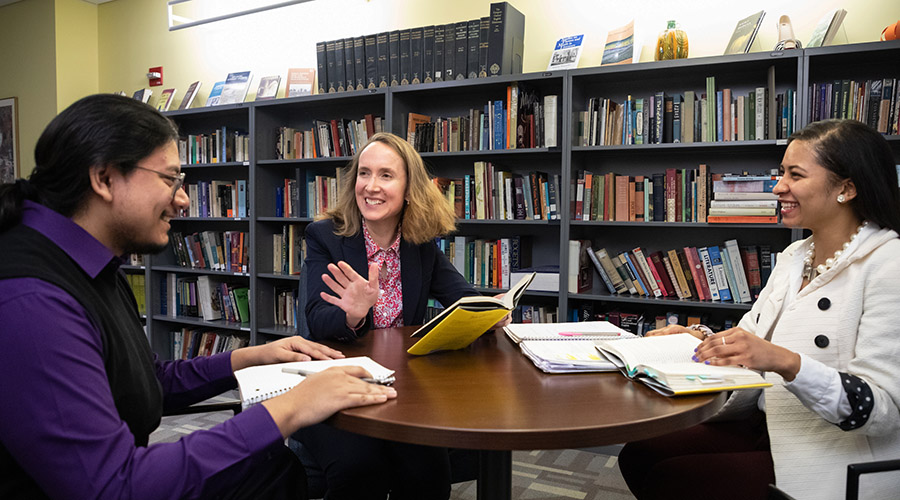 Samari Winklaar knows from experience how difficult it can be to cross a border and begin a new life.

“Immigrating to the United States was a very hard and long process,” said the Suffolk student, who was born in the Netherlands Antilles and whose parents are from the Dominican Republic. “It was a constant fight and struggle for my family and me to be accepted in this country.”

Developing familiarity with immigration issues is important to Winklaar, Class of 2020, and she is gaining new insight through an English course that explores tales of people and groups who have traveled to the United States in search of greater freedom and opportunity. While some stories have happy endings, others are filled with challenge.

“This course teaches you about different immigration experiences and it makes you want to change the way things are now in every way.”

A subject close to home

Like Winklaar, many students in the Immigrant Stories class are from families who have settled in America fairly recently.

Bryan Lopez, Class of 2020, said immigration is “a topic that has been evolving in my own family for a long time.” He enrolled in the class because “I wanted to learn more about the immigration process and how it relates to what we currently see in the news media.”

Although Lopez was born in Boston, his mother and father came to America from Central America some 25 years ago. They are now in the process of becoming naturalized U.S. citizens.

“It’s a complicated and tedious process that we’ve discussed in class at length,” said Lopez, who is studying English with a creative writing concentration.

“I want students to think more deeply and share the human aspects of their personal immigration stories with others.”

The students analyze fiction, nonfiction, and films depicting immigrant stories and write about what they’ve learned. They also discuss their views in small-groups discussions.

English Professor Leslie Eckel encourages the students to take the lessons learned in class to a higher level.

She has asked them to reflect on how immigration is relevant to their individual majors and how they can advocate for immigration and immigrants going forward. Eckel also has encouraged them to write about immigration for publications such as the Suffolk Journal student newspaper.

“I want students to think more deeply and share the human aspects of their personal immigration stories with others,” said Eckel. “I also want them to realize that language matters when you talk about immigration, because what you say can be helpful or hurtful.”

“I want to provide a voice for immigrants."

“This course teaches you about different immigration experiences and it makes you want to change the way things are now in every way,” said Winklaar, a Political Science & Legal Studies major who became an American citizen after living in the United States for 10 years. “This nation was built off immigrants, and it’s not OK for people like me and others to be judged and belittled because of where we come from. We came here to make a better life for ourselves, and we shouldn’t feel like ‘aliens’ in this country.”

Winklaar may have found an entrée to creating change after listening to Amira Al-Subaey of the Massachusetts Immigrant and Refugee Advocacy Coalition, who spoke to the class about her personal and work-related experiences.

Winklaar approached Al-Subaey after her talk to ask about volunteer opportunities at the nonprofit organization.

“She made a huge impact on me by what she talked about, like how she had to struggle to get where she is now and helping to make a difference for others,” said Winklaar, who aims to make a career in the immigration field.

In a field trip to the North End, a Boston neighborhood that has been home to waves of immigrants since the 19th century, students stood before the Paul Revere statue and talked about the Freedom Trail.

Said Lopez: “That experience was interesting, especially after reading the preface to Walt Whitman’s Leaves of Grass, where he relates to America as ‘not merely a nation but a teeming nation of nations.’ The experience was a testament to that.”

Lopez hopes to one day apply what he is learning in class to his own writing. “I want to provide a voice for immigrants,” he said.