It's a Small, Small World

Physics students learn by doing as they design nanostructures 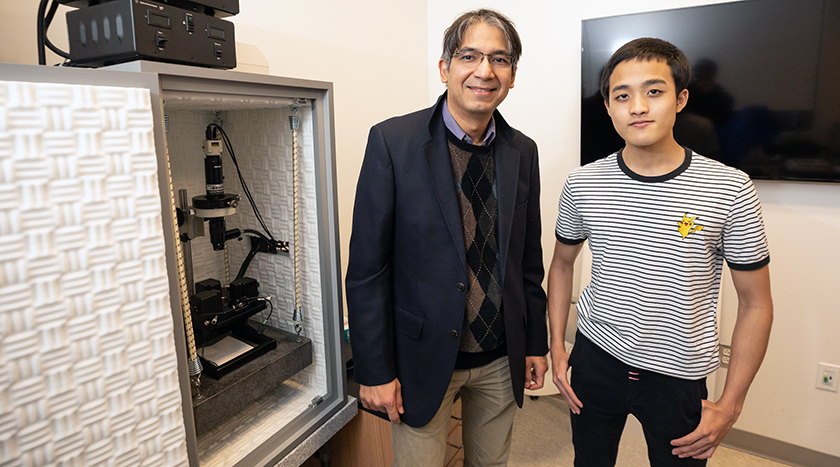 That’s one of the first lessons students learn in “Think Small: Change the World,” a Physics course built on creativity and technology.

“Big is not better in my class,” said Professor Prashant Sharma. “More is better.”

Sharma strongly believes that nanoscience is becoming the dominant direction for technology in this century, and he developed this course with that mind.

The curriculum introduces students to the central tenets of nanoscience and teaches them to design nanostructures in an innovative way using in-house computational and experimental tools.

“The course is project-based and focused on experiential learning,” said Sharma. “This allows students to come together when reflecting on their failures, learning from their experiences, and discovering creative solutions to successful projects.”

The course was specifically developed for the University’s Creativity & Innovation program, which encourages first-year students to take chances as they establish creative practices. Its courses are aimed at instilling flexibility in thinking so that students will explore new ideas without fearing failure.

“The course features cutting-edge science that is of the moment and supports Prachant's research, but it also embeds active learning strategies that appeal to first-year students,” said Professor Marilyn Plotkins, chair of the Theater Department, who is involved in development of Creativity & Innovation curriculum. “We believe that one of the reasons that the course works so well and is so interesting to first-year students is its embrace of experiential learning techniques.”

Rather than preparing for exams, the student work through challenging problems through collaboration.

“This course teaches you to work together and think outside the box,” said Calvin Kem, Class of 2022, a computer science major. “It allows you to convey your ideas with others and look at a problem with a different perspective to find the solution.”

“This course…allows you to convey your ideas with others and look at a problem with a different perspective to find the solution.”

As part of their final project, students designed nanostructures using DNA as a building block. They chose to design the letters in the word Suffolk, and the team led by Kem chose the letter S.

Their design task was to fold a single DNA strand (similar to a strand of spaghetti) into the shape of the S structure, and then to use several shorter strands of DNA to staple this long strand in place.

Kem described this and other projects as “helping me with my creativity and critical thinking skills.”

“If you are stumped about a problem [Sharma] asks you a question that makes you think more critically about the problem, and eventually you will get the solution,” said Kem.

He references the time when students were shaking their heads after Sharma asked the class: How do you measure the size of soap molecules? The professor then showed everyone how to come up with the right answer by having them imagine a deck of playing cards.

“That was a learning experience that I remember the most,” said Kem.

As a project follow-up, students are required to write a report about what they had hoped to accomplish, what they ended up doing, and what the process entailed to create their final product.

“I’m teaching students to work together to make things in the world of nanodesign by using their creative ideas,” said Sharma. “And I’m pleasantly surprised with their level of engagement and collaboration to think differently and learn something new.”