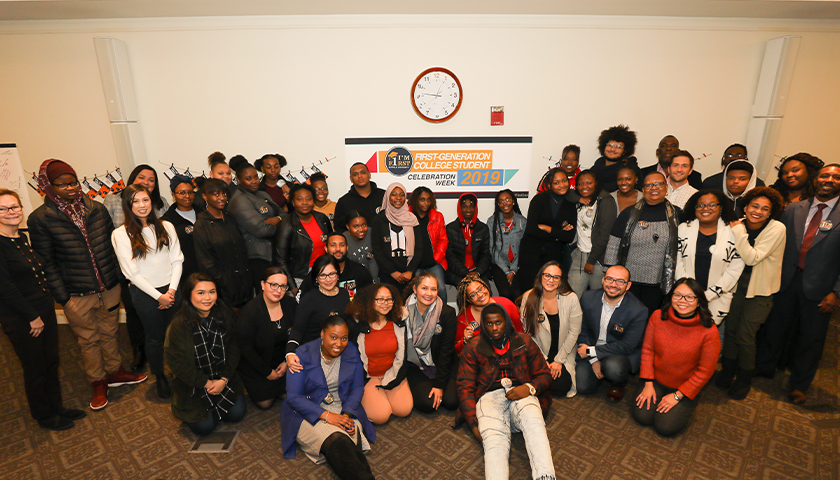 Students gather for the 2019 First-Generation College Student Celebration, a week-long event held every November. First-gen students now make up close to one-third of the undergraduate population.

A university founded to create greater access to higher education has just received national recognition for its work with first-generation college students.

The Center for First-Generation Student Success has named Suffolk University a First Gen Forward institution—one of 58 U.S. colleges recognized for improving the experiences and outcomes of students who are the first in their families to attend a four-year college.

“It was evident that Suffolk is not only taking steps to serve first-generation students but is prepared to make a long-term commitment and employ strategies that foster an environment of success for this important population,” said Dr. Sarah E. Whitley, assistant vice president of the Center for First-Generation Student Success.

For Abráham Peña-Talamantes—director of Suffolk’s Center for Academic Access & Opportunity, which helps prepare income-eligible first-generation and underrepresented students with their transition to college and graduate school—this work couldn’t be more personal.

Peña-Talamantes is himself a first-gen college student who keenly remembers what it was like to be “that low-income student whose parents didn’t know how to fill out a FAFSA.”

Today he is a sociologist with a PhD from Florida State who oversees a staff of 11, all of whom are themselves first-gen. And together with Suffolk’s Center for Student Diversity & Inclusion and its Division of Student Success, he’s working to increase support for Suffolk’s first-gen students—who make up close to 33 percent of Suffolk’s undergraduate population. 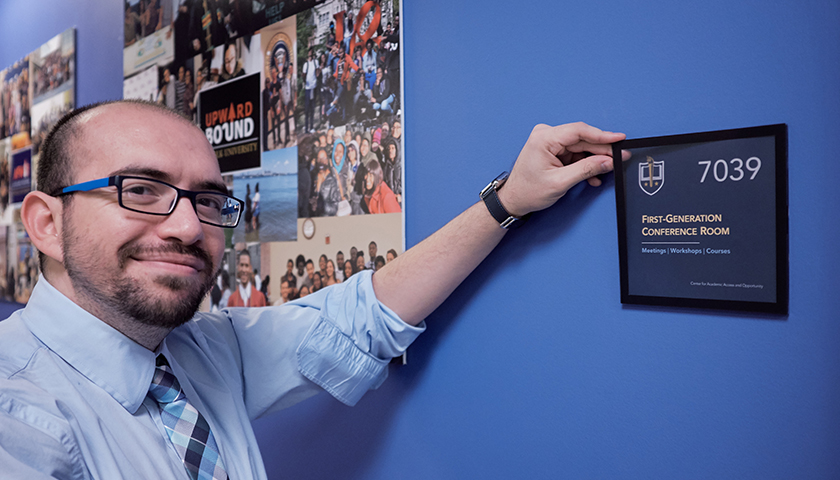 “Suffolk is a great university because of what our first-generation students contribute,” says Abe Peña-Talamantes, director of the Center for Academic Access & Opportunity. “They have things they can teach us, and they enrich our community and everyone’s experiences.”

That support network is spread across campus, and enjoys strong backing from Suffolk University President Marisa Kelly and Provost Julie Sandell. The Division of Student Success runs the Connect the Dots program, which pairs first-gen students with campus mentors, and hosts workshops on topics like financial literacy, academic planning, and internship opportunities.

The Law School, which has its own first-gen students association, just launched an ambitious new scholarship program for first-gen graduates of 25 New England colleges. Admitted students will receive guaranteed $20,000 scholarships, renewable for all three years of law school.

Suffolk’s designation as a First Gen Forward school will help with that. Since it launched its recognition program in 2017, the Center for First-Generation Student Success has provided more than 200 colleges with access to scholarly research, evidence-based best practices, training workshops, and networking opportunities.

In fact, first-gen students are so much a part the university’s history and identity, says Peña-Talamantes, that one colleague told him that “in the past we didn’t really talk about these students”—at Suffolk, they were the rule, rather than the exception.

Nowadays, colleges across the country are talking about first-gen students because they represent “an increasing population at nearly all institutions of higher education,” according to the Center for First-Generation Student Success.

That population can face unique challenges. First-gen students often need help learning how to navigate the institution, with its specialized departments, schedules, and jargon. Many also struggle with imposter syndrome, wondering if they have what it takes to do college work.

“The message from all our offices is: You belong here,” says Peña-Talamantes. “These students aren’t imposters, they’re diamonds in the rough. When they get the opportunities and encouragement they need, they’re unstoppable.”

In 2018, Suffolk opened the First-Generation Conference Room on the seventh floor of 73 Tremont Street, as a welcoming space where first-gen students could relax and hang out. The plaque on the door reads: “In honor and recognition of all first-generation college students, whose perseverance and resilience grant them the unique ability to change the world.”

That perseverance and resilience, as well as plenty of talent, is on display every November when Suffolk hosts its First-Generation College Student Celebration, a week-long series of workshops, lectures, and festivities.

“We are a great university because of what our first-generation students contribute,” says Peña-Talamantes. “They have things they can teach us, and they enrich our community and everyone’s experiences.”

To learn more about Suffolk University's services and initiatives for first-gen students, visit the Center for Academic Access & Opportunity.