After years of training, Daniyar Aubekerov, BS ’21, earned a silver medal at the 2021 International Mathematics Competition 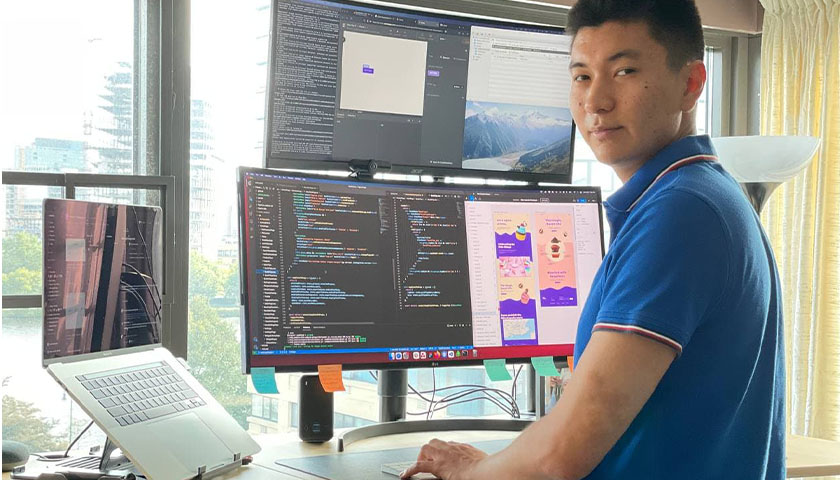 “It’s all about exercising my brain like I exercise my biceps,” says the 2021 Suffolk graduate.

Aubekerov’s mind was in tip-top Olympic form during the 2021 International Mathematics Competition (IMC), which attracted more than 500 undergraduate students from some of the leading universities in the world. He finished in the silver medal group.

Held every August, the two-day event is open to undergraduate math students, as well as recent grads like Aubekerov. Due to the pandemic, this year’s competition was virtual, with problems drawn from algebra, real and complex analysis, geometry, and combinatorics.

Aubekerov credits his impressive performance, in part, to what he learned as a mathematics major at Suffolk, particularly in courses focused on discrete math and problem solving.

“Suffolk has a well-structured curriculum for mathematics and it helped me sharpen my skills and knowledge,” says Aubekerov, who now works as a software engineer for Anima App in New York, a company that transforms website designs into code. “I knew thousands of different facts, but Suffolk helped me to fully understand how they are all connected and needed.”

Aubekerov’s math skills made an immediate impression when he transferred to Suffolk from Bunker Hill Community College, where he earned an associate’s degree in computer science in 2019.

‘Every problem is unique’

To illustrate how well Aubekerov finished in the IMC, the average total score, based on a 0-10 scale for each question, was 3 points. Aubekerov tallied 28.

“In competitive mathematics, every problem is unique,” he says. “This makes it most challenging and you must be very creative. You also need tons of practice.”

The IMC involved solving a total of eight problems ranging in difficulty. “The easiest one was a classical combinatorics problem, where you are given some scenario and asked to compute the probability of some event,” he explains. The final problem was so difficult, he adds, “that almost no one could solve it.”

Born and raised in the central Asian country of Kazakhstan, Aubekerov has been participating in international math competitions since middle school.

Shortly after arriving at Suffolk, he made news by placing in the Top 100 in the prestigious William Lowell Putnam Mathematical Competition. He scored 40 points — the median score was 8 — competing against 1,593 students from 360 institutions, including MIT, Stanford, and Carnegie Mellon.

“Daniyar is brilliant,” says Suffolk Math Professor Sheldon Joyner, the University’s faculty advisor for the event. “He was always very engaged and knowledgeable about mathematics, in and out of the classroom.”