A week of team effort can change lives, and Suffolk students had proof of that when they visited a Myanmar family living in a home built by Suffolk hands in 2019.

“They had a Suffolk poster on the wall and told us they never want to forget what we did with them,” said Adam Westbrook, director of the University’s Center for Community Engagement, who returned in January to Son Pi, Thanatpin Township, the same Myanmar village, to work on a Habitat for Humanity Global Village project with a new group of students. Seeing the effect on that family of having a home due to the work of another group of Suffolk students “helped to motivate this year’s group to work even harder when on site,” said Westbrook. 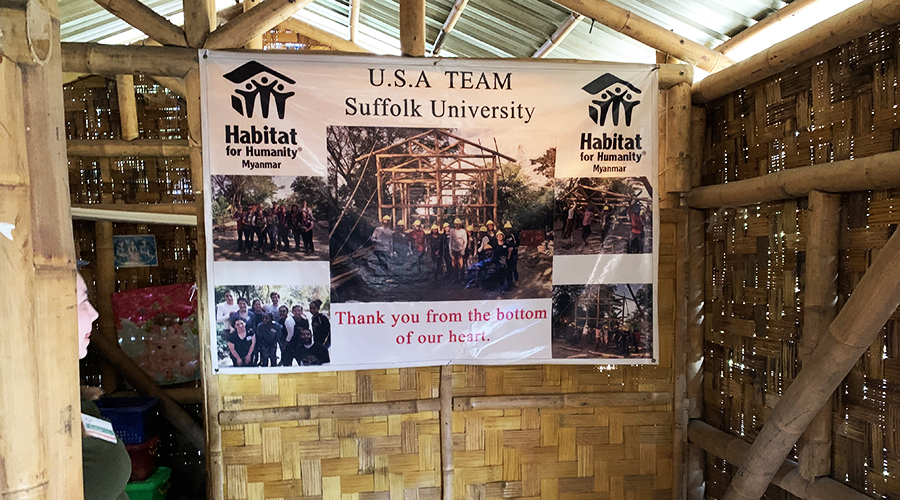 Suffolk students and staff have been learning and serving in international communities each January since 2007, when the first Alternative Winter Break program visited El Salvador to learn firsthand how a nation comes back together in the aftermath of civil war and also to help build a family home.

Since then, students have focused on political, social, and economic issues in visits to Vietnam, India, and, for the past several years, Cambodia and Myanmar. They volunteer with Habitat for Humanity, learn through visits to historical and cultural sites such as ancient Buddhist pagodas, examine how NGOs operate in developing countries, and reflect on differences between cultures. 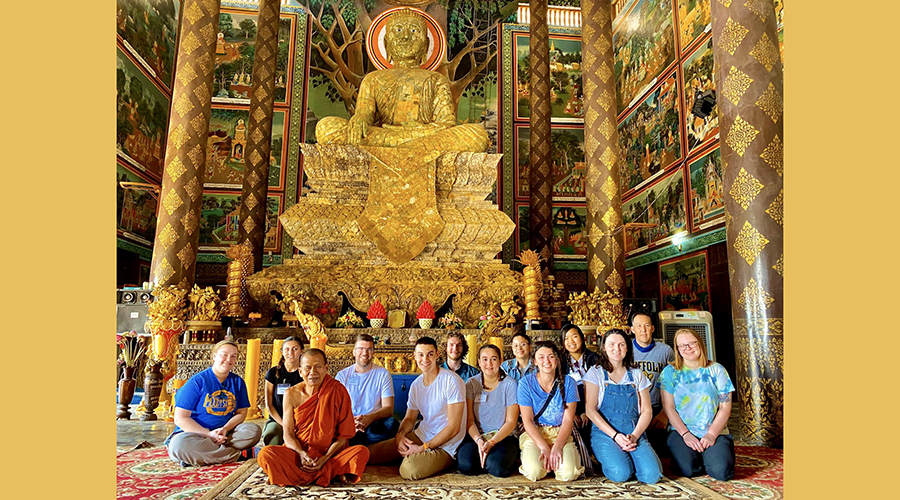 Students began their experience in Cambodia for the past two years by volunteering for two days at the Cambridge Cambodia School, which was established by a group of citizens from the city of Cambridge, Massachusetts, in 2008 and supported by an NGO called World Assistance for Cambodia.

“We were warmly welcomed by about 200 students and spent our days learning more about the school and public education in Cambodia and practicing English with grade seven, eight, and nine students,” said Dennis Harkins, assistant director of the Center for Community Engagement, who accompanied the students to Cambodia.

Kristiana Le, Class of 2022, described the encounter with the schoolchildren and learning about a different society as “life changing.” Those are not words spoken lightly: Le changed her major to International Relations once she was back on campus in mid-January.

“These students were more than inspirational,” wrote Le in reflecting on the experience. “They had so much passion in the classroom to not only study English but also to support and help one another.”

The Myanmar group also spent time with schoolchildren as the journey began, part of their immersion into the life of a country that was previously unknown to them. 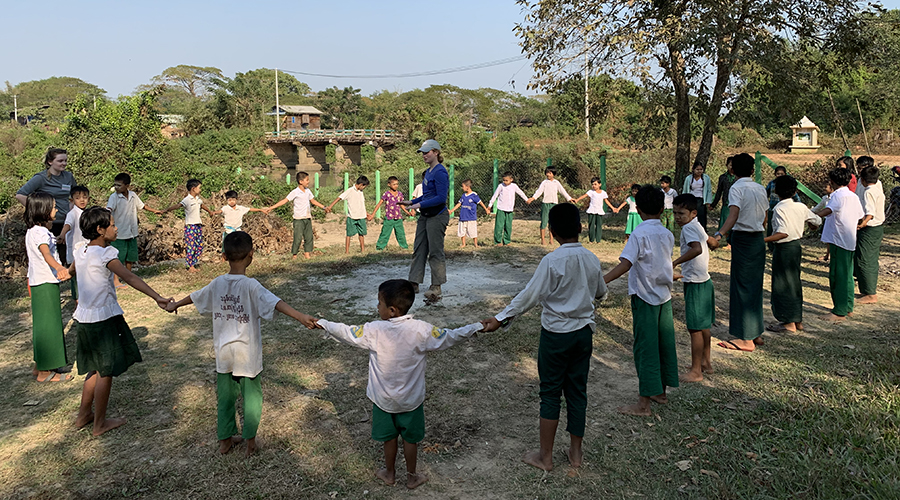 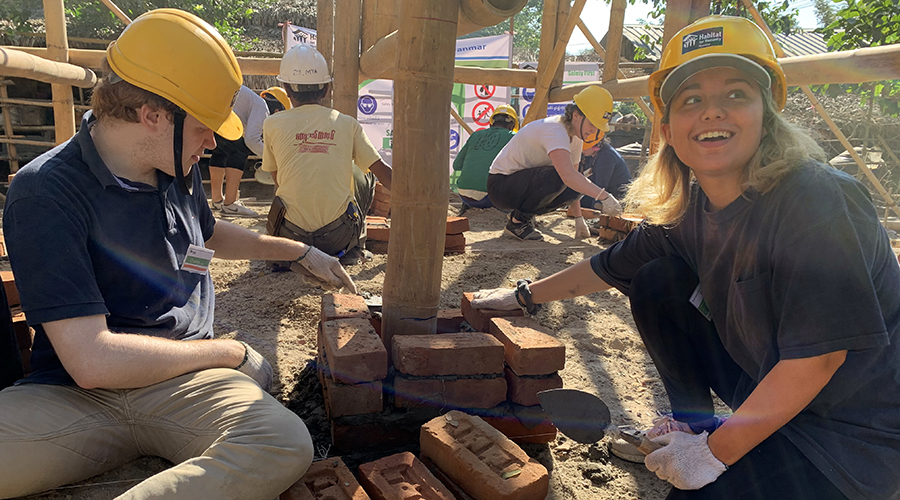 “I was amazed by the cultural experience, from the pagodas to the markets,” said Charles Gobert, Class of 2022, a pre-law major. “Interacting with the people, whether the workers or the schoolchildren, was also a great way to learn about the Burmese culture.”

The 2020 Alternative Winter Break participants ranged from first-year to graduate students. They prepared ahead for their encounters abroad by hearing from previous student participants and speakers who have studied and worked in Cambodia, reading pertinent materials, and meeting the peers with whom they would spend 10 days.

At their destinations, each group became a tight-knit unit, and the students surprised themselves by finding ways to communicate with the villagers as they worked together, despite lacking a common language.

One word the Myanmar group mastered: “mingalaba,” the Burmese greeting they learned while working alongside the people of Son Pi, a farming village where the students helped build a bamboo home in five days for the family of Daw Thu Zar Myint, a widow who lives with her young child, brother, and mother.

“Not only did I get to build a new house, but I got to build new relationships with people from my community as well as the village community” in Myanmar, said Jordan Smith, Class of 2023, who is studying Sociology, “The appreciation that the people of Myanmar have for our presence is so heartwarming and inspires me to do more work like this.”

Koch’s group also completed a house in five days, but its appearance was quite different from the woven bamboo of the Myanmar home. The house with blue walls and green shutters is the new home for a family of 10: Kem, Somorn, Thyn, Pov, Channey, Roth, Sreymao, Ratana, Ratanak, and Navy, all of the Sreah Por Village in Kandal Province. The family also asked that a plaque signed by the Suffolk group be affixed to their front door, “so that they would always remember our team each time they walk into their home,” said Harkins.

When the homes were finished, villagers and students put away their tools and celebrated. There were speeches and traditional dances—and shared memories that will last a lifetime.