Sabrina Wright forced herself to have an open mind about her firm political beliefs when she was exposed to other viewpoints during a two-week Washington Center seminar in January.

“I force myself to have an open mindset set while in DC and at the same time challenge myself to see another side, because there is always more than one side to the coin, and everyone has their beliefs for a reason,” said Wright, a Suffolk graduate student studying Applied Politics.

Kayo Kiriu had never expected to meet members of the Massachusetts congressional delegation during her visit to the nation’s capital.

“It was an amazing experience that usually people cannot do, and we got to ask questions about Massachusetts issues and Trump’s impeachment,” said Kiriu, who completed a pathways program through Suffolk’s INTO partnership this fall before entering a graduate program in Global Public Policy. She said she would not expect to have such an open conversation with representatives in her native Japan.

These students and their peers were immersed in discussions of government policy and politics through an Inside Washington seminar organized by The Washington Center, which has provided Suffolk students with internship, inauguration, and topical seminar experiences during a decades-long partnership with the University.

Suffolk University offers the following programs through its partnership with The Washington Center:

Hearing two sides of an issue

During a jam-packed two-week schedule, the students heard each morning from speakers who took different and often opposing points on a wide range of issues, including impeachment, immigration, climate change, taxation, the national debt, elections, and more.

They got to ask questions of political insiders, including Peter Wehner, a former adviser to Presidents Ronald Reagan and Bush father and son, and Philippe Reines, former senior adviser to Hillary Clinton. They learned about the media from Washington Center guests such as Sarah Ferris, a congressional reporter for Politico, Stephen Dinan, national political reporter for the Washington Times, and Steve Scully, senior executive producer and political editor for C-SPAN. Video from the sessions are online, and some include Suffolk students posing questions of the speakers.

Afternoon site visits planned by Political Science & Legal Studies Professor Christina Kulich-Vamvakas, who teaches the course connected to the Washington seminar, took the Suffolk group on a private tour of the House of Representatives, to meetings with members of the Massachusetts congressional delegation and the Guatemalan ambassador to the United States, and an alumni reception where Suffolk President Marisa Kelly spoke.

“We  got to sit on the House floor—the seats which our representatives take when making important votes and debates,” said Wright. “We were able to watch the House vote on the War Powers Resolution; we watched bipartisanship at its core—seeing that it still exists; we watched the Senate be sworn in by the Chief Justice of the Supreme Court.”

And, to prepare for a semester-long research project that will tap into the resources of Suffolk’s Moakley Archive, students spent more than an hour in the Rules Committee hearing room with Massachusetts Congressman and Rules Committee Chair Jim McGovern, onetime chief of staff to the late Congressman Joe Moakley. The archive holds Moakley’s and some of McGovern’s papers.

“After the two weeks I feel strongly that I now understand both sides of the aisle, which is something I could not say before attending the seminar,” said Meagan Dyer, Class of 2022, who serves as a senator in Suffolk’s Student Government Association.

Dyer said she had been exposed to only one side of the gun rights – public safety issue before hearing from Amy Swearer of the Heritage Foundation and Josh Horwitz of the Coalition to Stop Gun Violence during a Washington Seminar session.

“I was fascinated by this discussion because I held certain views toward this issue but had never heard other perspectives…from a conservative think tank and a more progressive/liberal think tank,” she said. “By the end of the conversation I felt I finally understood different perspectives on this issue other than my own.”

For Adriano C. Pucci, Class of 2020, the conversation about the gun issue “was shocking” as it demonstrated “how much two people from opposing ends of the ideological spectrum agreed upon….It further cemented for me that we can find a way out of the polarized political environment we find ourselves in today. Understanding rationales for belief and protection of the Second Amendment and analyzing the constitutionality of such reforms was truly eye-opening.”

January is hardly a sleepy time in Washington. This year’s Washington Center seminar took place while the impeachment drama unfolded, while last year’s seminar offered a firsthand look at negotiations to end a record-breaking government shutdown.

“Being in DC for these two weeks, we were able to see history unfold a couple blocks down the street from us,” said Pucci, who is majoring in Political Science and Environmental Studies.

“We had many speakers from both sides of the aisle present arguments for or against the impeachment of the president of the United States, how parliamentary tools embedded within the fabrics of both houses of Congress impact these arcane processes and their outcome, and so much more,” he said.

The arguments over constitutional issues related to the impeachment process piqued Pucci’s interest in “analyzing and understanding the true will of the framers of our Constitution and political context they found themselves in at the time.”

Kiriu had been a bit apprehensive about joining a group of students she didn’t know while still honing her English-language skills, but she found the Suffolk group to be quite welcoming. By the end of the seminar, “they were like family.”

And her first experience as a Suffolk graduate student already has influenced her goals: “My dream has been to be a diplomat, but the experience in Washington definitely changed my view of my career,” said Kiriu, who is now exploring options that include staying in America and pursuing a government-related career.

Pucci, who plans to apply for The Washington Center’s internship program, said: “I cannot recommend an opportunity like this enough for students wishing to further their understanding of American politics and be challenged on a variety of issues they never would have imagined.” 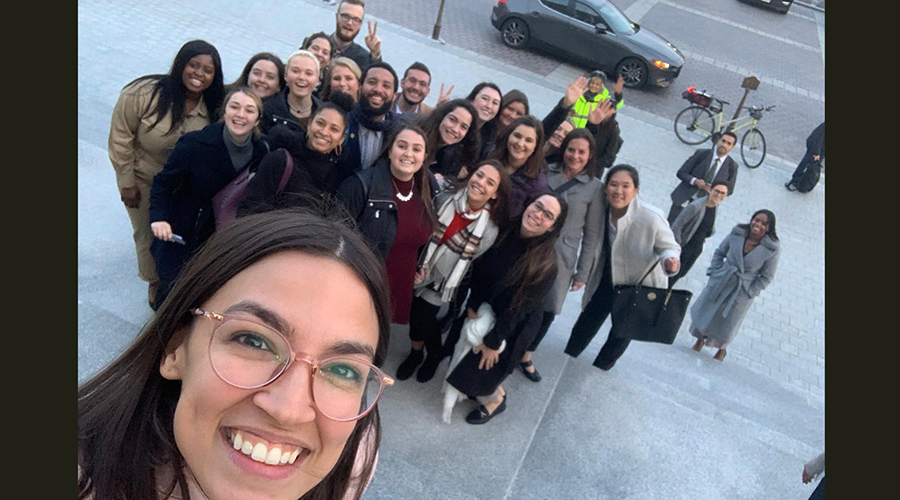