Lab Work Without a Laboratory

From accessing telescopes to observing nature

Astronomy students were preparing for a four-night lab at the Teide Observatory in the Canary Islands when the global pandemic sent most of them home from Suffolk’s Madrid campus. Yet Professors MariaCruz Gálvez and Hristo Stoev were able to reinvent the lab and deliver it online.

Students logging in from time zones spanning the Americas and Europe connected to a robotic telescope on La Palma, used Stellarium software to simulate observations and astronomical events, and “traveled" around the solar system exploring the planets and their moons, according to Gálvez.

“We also had very interesting debates—about the importance of human spaceflights, global warming, the future of life on Earth, and the science that we can find in popular science fiction movies,” said Gálvez.

As colleges and universities have transitioned to remote learning, Suffolk professors are innovating in areas such as theater, studio art, and STEM laboratories—areas where online learning is hardly the norm.

Mikayla Hopkins, Class of 2022, an Accounting major who stayed in Madrid with her host family, said her Astronomy professors worked hard to get everyone engaged and interested in the subject matter during five hours of classes for four straight days—the timetable had they been in Tenerife. 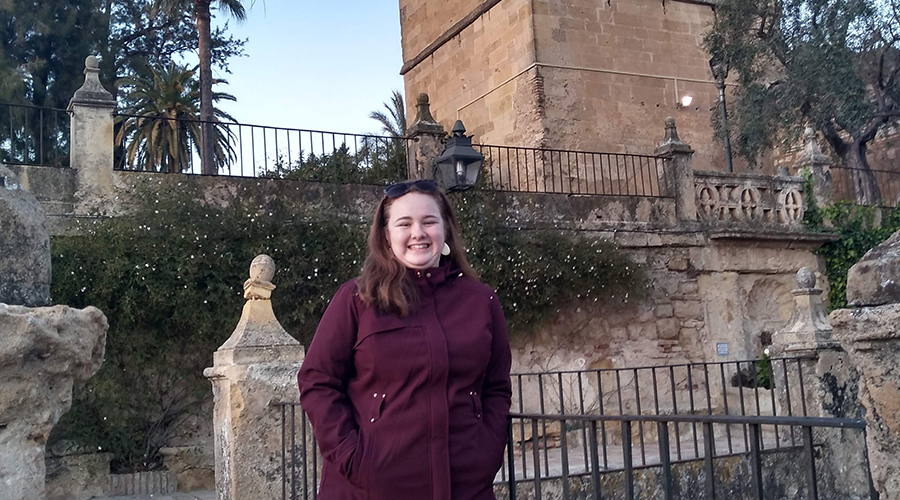 In addition to using software to “look at stars and constellations millions of light years away” and taking images of their project topics—black holes in Hopkins’ case—“we had discussions about every scientific inaccuracy in the movie Gravity, the technology in Star Trek/Star Wars/sci-fi movies in general, and then a role play where we had to convince our peers that the Earth was round.”

The role play gave Hopkins “a greater understanding about how brave scientists must be to reveal findings that go against everything that most people believe in. Specifically, in the instance of Galileo, he was going against the church, which controlled everything, and paid the price by being put under house arrest and tried for heresy.”

While science lab courses are continuing, professors are finding a wide variety of ways to conduct them virtually, according to Chemistry and Biochemistry Professor Melanie Berkmen, interim cochair of the Division of Physical Sciences.

Physics Professor Walter Johnson and Pol Perov, head of laboratories, had been making virtual labs for Physics for several years, and when they saw signs that the world was on the verge of a pandemic, realized there was a good chance the campus would close.

“We at the Physics Department had some labs virtual and some real, but for the end of this spring semester, we made them all virtual,” said Perov.

In a lab on capacitors—circuit elements that can store charges on their plates—conducted shortly after remote learning kicked in, Perov used a simulation developed by the PhET team at the University of Colorado, Boulder. He noted that most of the virtual labs the department has used for years were developed by the team at the Kentucky Educational Television (KET).

“Their virtual labs are really good, and we have been working with KET under an agreement.,” said Perov.

Before they left campus, students in Biology Professor Nadine Lysiak’s Ecology Laboratory course had been working on ecology- and population-monitoring field experiments through observations of squirrels in the Boston Public Garden. The students developed a research question and data collection plan, collected data for four weeks, and then analyzed and interpreted it. Lysiak has taken that experience and translated it for remote learning for the remainder of the semester.

“Because some students have better access to nature than others, I gave them the choice of developing another project that they can complete wherever they are or watching a documentary about urban wildlife and then doing some additional library research to learn more about any particular species that was featured,” she said.

Biology Professor Maghnus O’Seaghdha had been using the virtual online lab website Labster this semester to support the microbiology labs on campus. Even though he finds Labster useful for preparing his class, “for microbiology, there is no substitute for the feel, smell and time management that being at the bench provides and demands, but virtual labs do provide the opportunity to go over concepts covered in lab remotely.”

O’Seaghdha also sometimes connects individual students to the Journal of Visualized Experiments JoVE, which has made its video collection of bench experiments and educational material available without fees in light of COVID-19.

Berkmen’s students, unable to purify a protein as planned in a Biochemistry II lab, engaged in a discussion of how it is done and saw videos/animations that illustrate all of the steps. Instead of having students analyze that protein using various instruments, Berkmen linked them to videos that demonstrate techniques and gave students mock data to analyze.

“We are doing our best to reach the same learning goals, but it requires a lot of creativity and hard work,” said Berkmen.