Community activism and public service are foundational to Isaac Boateng—and to his budding career.

Nathaniel Panek
Michael J. Clarke
Some people see the world’s injustices and think, “That’s not my problem.” Some see things that are very much their problem, but feel powerless to solve them.

Then there are people who see those problems—and absolutely no reason not to tackle them head-on. That’s the kind of person Isaac Boateng is. 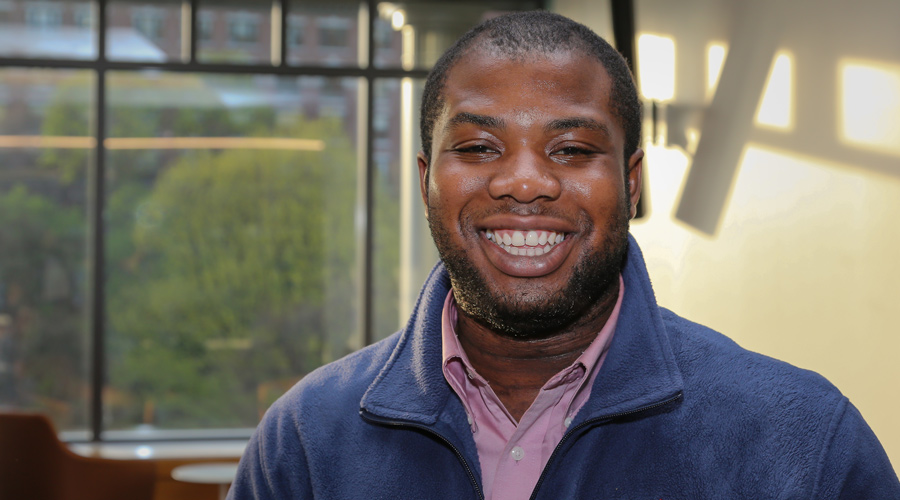 It all began when he was a high school sophomore in Worcester, Massachusetts. His civics teacher, Mrs. Burke, opened a life-changing door of opportunity for him.

“We were talking about public service,” Isaac, BA ’17, says. “At that time, Governor Deval Patrick was running for re-election, and Mrs. Burke told the whole class that if anyone was interested, the Patrick campaign was hiring volunteers.”

After class, Isaac walked up to Mrs. Burke and asked how he could get involved. With that question, he launched a chapter of his life that’s still unfolding.

Isaac joined the Patrick campaign as its youngest volunteer. He got straight to work, helping to form the African Council, a group focused on building connections with and support for the governor among Worcester residents from Africa. He knew this constituency well: Isaac’s own family emigrated from Ghana when he was six. Isaac soon formed ties with the organizations of other prominent politicians, including Congressmen Jim McGovern and Ed Markey, and Setti Warren, at the time the mayor of Newton, Massachusetts, who had launched a bid for the U.S. Senate.

“Through that work, I built a lot of relationships with civic leaders,” Isaac says. “But I also had conversations with community members where I asked them, ‘What is missing in your community that we can address?’”

Ensuring that communities could access and speak to their leaders became increasingly important to Isaac—and he excelled at it. Before he even graduated from high school, he knew public service was his future.

“I love giving back to people,” he says. “I love supporting people.”

A Scholar at Suffolk 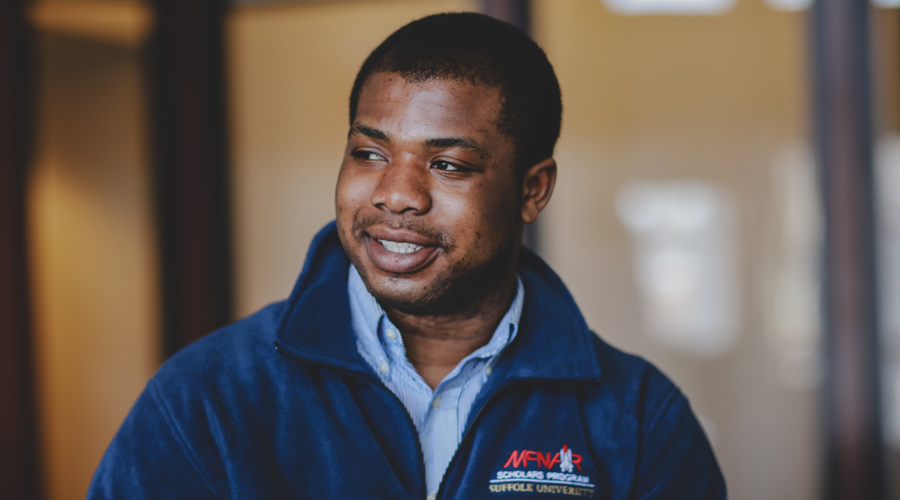 “What drew me to Suffolk was the law school,” Isaac says, “but also the fact that it graduates a lot of people doing public service. I wanted to get something out of the University and be able to put it to work.”

To no one’s surprise, Isaac chose government as his major. He was definitely surprised, though, by a phone call he got the summer after his freshman year. It was his Suffolk advisor, informing him that he’d been nominated for the McNair Scholars Program. Named in honor of NASA astronaut Ronald McNair, the program encourages and prepares low-income and first-generation college students to succeed at the highest level of graduate education, where they’re often underrepresented.

“It brought home the fact that, hey, Suffolk does see something in me,” Isaac reflects, adding, “and I would want to be able to give it back to Suffolk.”

He did just that in what’s become his trademark fashion: sharing his connections to leaders and starting conversations. After joining Suffolk’s Black Student Union (which he eventually helped lead as vice president), Isaac contacted an old acquaintance from his days with the Deval Patrick campaign—Boston City Councilor Tito Jackson. At Isaac’s invitation, Jackson came to campus and spoke with students about policing issues, and the importance of voting and civic engagement. 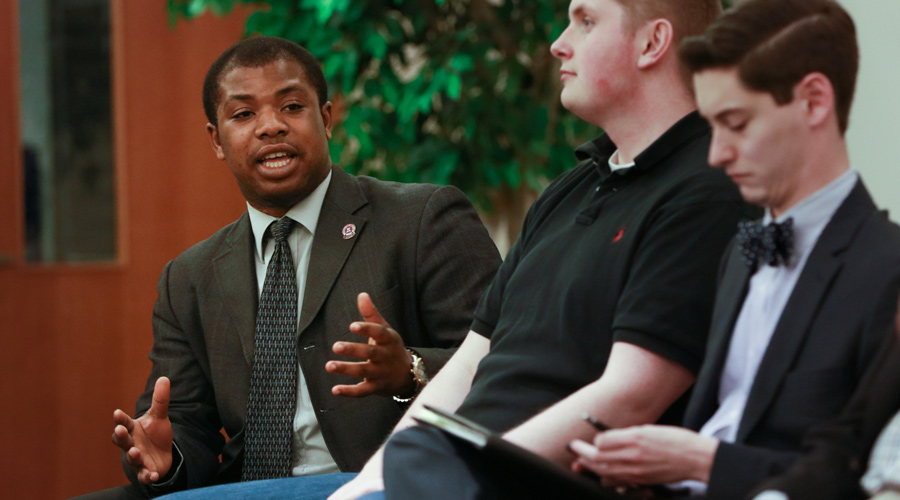 This zeal for dialogue led Isaac to start one with Suffolk’s leaders after Eric Garner’s death at the hands of New York City police in 2014. Troubled by what he saw as a lack of University engagement with the issues of systemic violence and racism, he directly asked then-Provost (now President) Marisa Kelly when he saw her on campus one day: Do you support Black Lives Matter?

Kelly does support Black Lives Matter, and she remembers the conversation well. Even prior to that conversation she was working to increase Suffolk’s focus on creating a more just and inclusive environment. During her tenure, first as provost, then as president, she has focused on issues of inequity and worked to mobilize the University to take on systemic racism and injustice at Suffolk and in the broader community.

“We built on commitments that had long been there, and started focusing on these issues because we saw it was needed,” Kelly explains.

Isaac’s question about support for Black Lives Matter sparked yet another conversation with Kelly. “I scheduled a meeting and had a chance to talk to her one-on-one,” he says. “I got to know her.”

Kelly remembers that first meeting as well. “Isaac was passionate and very helpful in thinking about how we could best talk with students and listen to students regarding these critical issues.” 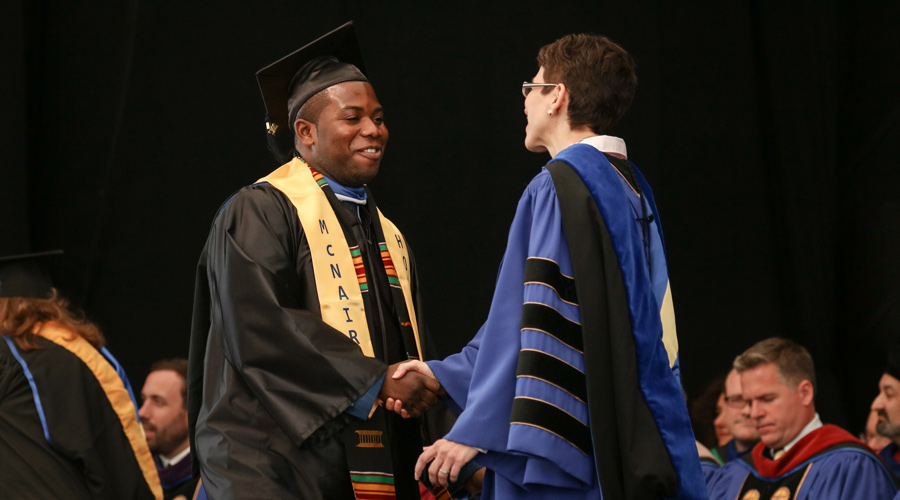 Has the Black student experience changed at Suffolk since that time? Isaac thinks so, noting recent strides such as the University’s hiring of more professors of color and course syllabi’s greater emphasis on inclusion.

“We have a great deal of work to do on this front, but we are committed to make real and lasting change at this University, in our community and across the nation,” Kelly says.

Isaac points to the newly created Suffolk University Black Alumni Network (SUBAN). The University’s Office of Advancement leads the group to better connect these graduates with career development opportunities, resources, and each other.

Now an alumnus himself, and a SUBAN committee member, he says, “I feel proud to have gone to Suffolk.”

Taking on the Nation’s Capital 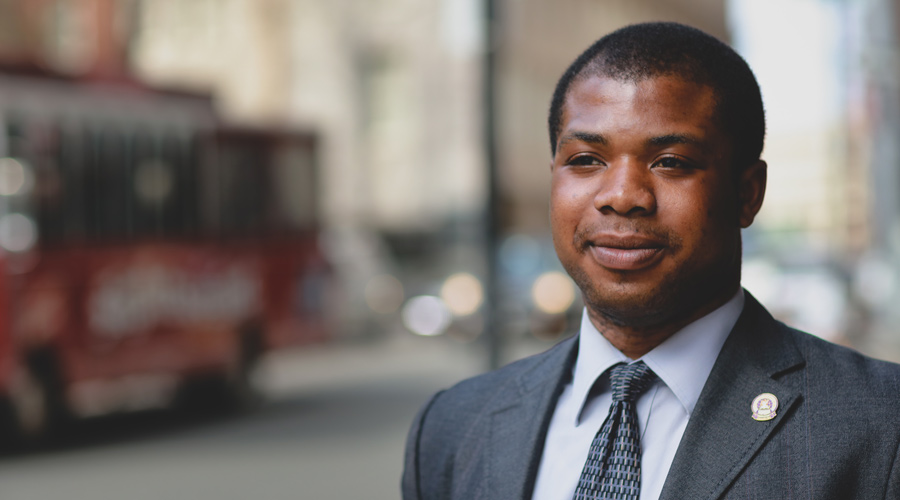 Taking advantage of his McNair Scholarship’s boost toward graduate school, Isaac earned a Master of Public Administration degree from George Washington University in 2019. Today, he’s an aide to the director of Washington, D.C.’s Department of Consumer and Regulatory Affairs.

Along with a colleague, Isaac manages the director’s schedule and social media accounts, briefs him on meetings (sometimes attending on his behalf), accompanies him to hearings, and works with various teams to addresses citizens’ questions on construction, permitting, and business licenses in the District.

Law school still has a place in his future plans. After that, he aims to start his own nonprofit for youth. Much as he was encouraged and empowered by Mrs. Burke and his Suffolk advisor, he hopes to give people not just the opportunity to be heard, but also to act.

“Young people are the voice of this country,” he says. “They are the ones able to make change.”

Since he was 16, Isaac has been living proof of that.