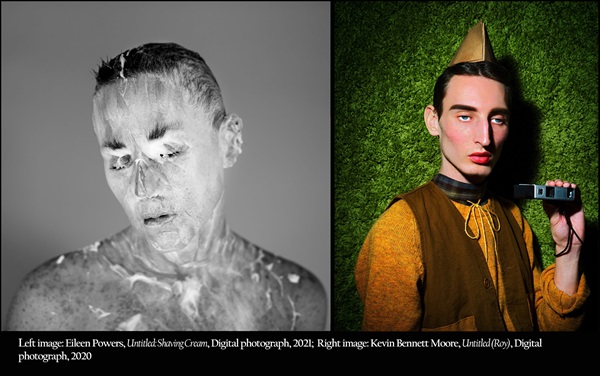 “The Portrait-Photograpg is a closed field of forces. Four image-repertoires intersect here, oppose and distort each other. In front of the lens, I am at the same time: the one I think I am, the one I want others to think I am, the one the photographer thinks I am, and the one he makes use of to exhibit his art.” (Roland Barthes, Camera Lucida, London, 1984, p. 13)

Some questions posed and answered by the works in the exhibit:

The role of the artist is to point to things. When depicting someone the artist makes decisions about what story to tell. Portraits not only articulate something about the subject, but also how that subject wants to be depicted and how the artist wants to depict them. This is multiplied and mirrored with the self-portrait. In the works of both Powers and Moore – performance is critical to how they each conceive of and present themselves. In addition, the viewer is invited to add to that conversation through projection, that is, the experience of the work also becomes about one’s own identity. The performative aspect for their works makes them tailor made for Instagram. The works themselves are records of that performance, in the end it is the image that is the essential thing. The self-portraits of Eileen Powers and Kevin Bennett Moore in Portraiture 2: Self, Mostly Photography gives us clues to who we are.

Powers says that by “taking on the roles of both agent and object I realize momentary self-constructions for the camera based on my experience with cancer. Theatricality and performance offer me the freedom to bring internal conflicts to the surface in the form of alternate selves. These performative identities have no history or future, they live briefly for a few second before the lens.”

Moore is influenced by his own queer experience and ideals of mid-century American culture. His project investigates a familiar environment that alludes to something more enigmatic. Creating vignettes of this space and time allows for the images to exist in reality or remain fictitious. Film, in short, is cultural performance. Moore looks specifically at masculinity as a way to question our ideas of gender and the performance of masculinity, in juxtaposition to our current political landscape. The characters become distant protagonists as the work allows the viewer to become a voyeur.

Painter Anne Harris depicts the female body in a way that brings to mind writer Christine Alic’s phrase “the contested landscape of the female gaze.” This means that Harris uses the female form as a site to wrestle with representations of the female body in art and to undermine its subjection to the male gaze, in common with painters like Frida Kahlo and Lisa Yuskuvage, who reimagine their visible selves either through direct representation or hallucinatory reimagining.

Photographer Karl Baden has been taking daily portraits every day since 1987.
He says “It's an open-ended project and hopefully will continue as long as I'm alive. I'd originally had the idea around 1975, but I suppose I didn't have the confidence or discipline to start doing it for another 12 years. At the time, my impetus was simply that I wanted to see what would happen; how I'd change as I aged. Since that time, however, I've realized I had other reasons for doing it that were less obvious and more subconsciously determined.”

Rachel Perry is known for conceptual works using drawing, photography, video, collage, sculpture and performance, which address “the fleeting nature of experience, the elusiveness of desire, and the persistence of objects in a throwaway culture.” Art critic Jerry Saltz has written that her work "not only grapples with consumerism but she is just about swallowed whole by it.” Her work also considers themes of gender identity, narcissism, privacy and information overload.

In most of her works, Cindy Sherman is model, photographer, and director. She regularly alters her appearance beyond recognition through makeup, prosthetics, and costumes. She draws her personas from a range of sources, including fairytales, art history, film noir, and the fashion world. Her use of costume and makeup challenged the way in which portraiture was considered.

Francesca Woodman is best known for photographing herself. But her pictures are not self-portraits in the traditional sense. She is often nude or semi-nude and usually seen half hidden or obscured – sometimes by furniture, sometimes by slow exposures that blur her figure into a ghostly presence. These beautiful and yet unsettling images seem fleeting but also suggest a sense of timelessness.

Ephemeral Artifacts: Remains of the Play, 2019