Emily Manfra produced her best performance for the biggest stage, earning All-America status at the NCAA Division III Indoor Track & Field Championships. Manfra was one of two Rams to compete in the track & field national championships at the Reggie Lewis Center in Boston, and the first-ever Suffolk student-athletes to make it to the tournament.

Manfra ran a 5:01.69 mile in the preliminary round and then surpassed that effort the next day with a personal record mile time of 4:54.13 to finish fifth and earn All-America status.

“This is definitely the top highlight of my athletic career,” said Manfra, who is a member of the University’s women’s indoor and outdoor track & field and cross country teams. “I run all year long, so receiving this award feels like all my hard work has finally paid off.”

Manfra, Class of 2020 and a biology major, believes competing against the highest ranked women runners nationwide elevated her performance.

“They set a fast pace, and I had to keep up or they would just pass me by,” she said. “My plan was to stay on the outside and not get boxed in and to give everything I had to stay near the lead group of runners throughout the race.”

“Emily has great speed and endurance, and she is a mentally tough kid,” said Head coach Will Feldman, Class of 2012 and a former Rams’ cross country runner. “She is finally figuring out how good she can be, and I think she has so much more in the tank.”

Emma Weisse, Class of 2020, ran in the 3000-meter event during the preliminary DIII Indoor Track & Field Championship round, joining Manfra in a first for Suffolk student-athletes.

“I was extremely proud of both Emily and Emma because they earned the right to be there,” said Feldman. “Their personalities balance each other out, and their individual achievements have to rank right up there in Suffolk sports history.” 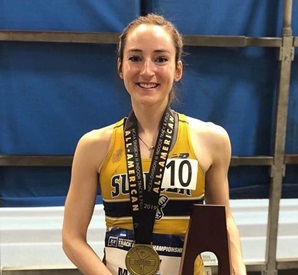