Broadcast journalism is not a theoretical discipline. Our students must be prepared to face the unique challenges of the real-world, real-time media. 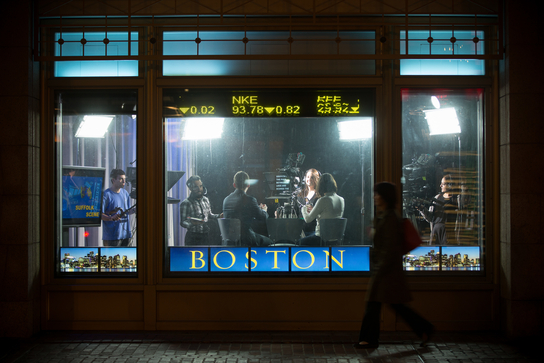 Studio 73 combines the most advanced HD technology with an unbeatable location, just steps away from the State House and Boston Common. Opportunities are available on both sides of the camera to provide students with a 360-degree view of the television news experience. Under the direction of Studio Manager Jerry Glendye, student crews work on projects such as:

Suffolk in the City

Even the most starry-eyed broadcast journalism majors know they’ll pay their dues writing, sourcing and researching stories for other people before they get their big break on camera. But thanks to a partnership between New England Cable News (NECN) and Suffolk University’s Studio 73, every six months three lucky and talented students are getting a taste of live reporting in a segment called “Suffolk in the City” that airs on the network’s Morning Show.

Following a rigorous audition process, NECN selects three Suffolk University students each semester to act as the main “Suffolk in the City” reporters for six months. The students work on weekly story pitches with NECN producers, tape person-on-the-street interviews, edit their footage into tv-ready packages, and participate in live Q&As with NECN anchors.

"Where else can you do that?" asks Monika Raesch, former chair of Suffolk's Department of Communication, Journalism, & Media. "There's the on-camera experience, but then also the exposure to the business side of journalism. It's invaluable experience."