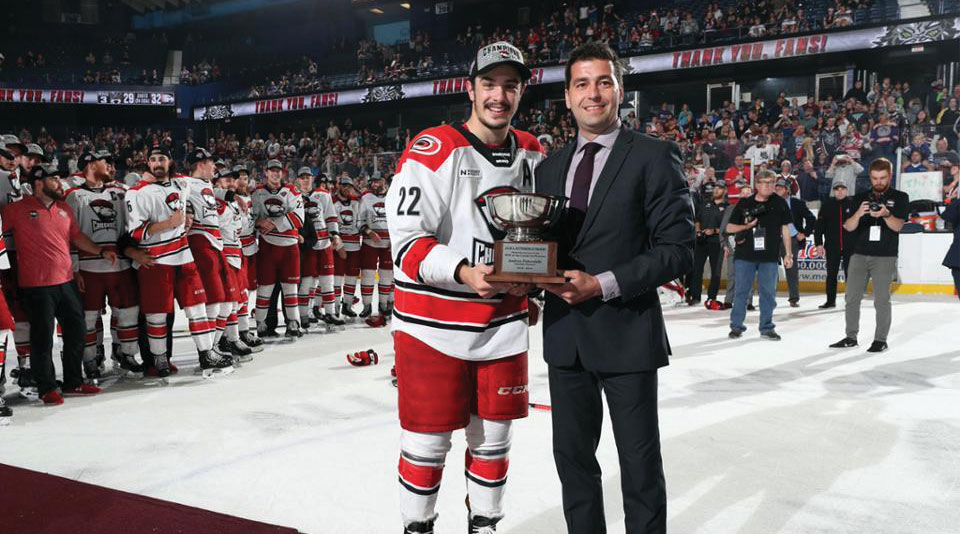 Michael Murray (right), in his previous position as the AHL executive vice president of hockey operations, presents the AHL Playoff MVP award (Jack A. Butterfield Trophy) to Andrew Poturalski of the Charlotte Checkers following their AHL Calder Cup championship during the 2018-19 season.

Michael Murray JD’08 has been named assistant to the general manager of the National Hockey League’s Minnesota Wild. In his new role, Murray will assist in the day-to-day responsibilities of the Wild’s hockey operations department, including contract negotiations, scouting, and player development. He will also support hockey operations for the American Hockey League’s (AHL) Iowa Wild.

Hockey is part of Murray’s DNA—he first wore skates and handled a hockey stick when he was 3 years old. He played at Dartmouth and for two seasons professionally, and his father, Bob Murray, was part of Boston University’s 1971 and 1972 NCAA championship teams. Murray was previously the executive vice president of hockey operations for the AHL.

“You can never have too many smart people around you, especially during these unprecedented times,” said Wild General Manager Bill Guerin. “Between Michael’s education and experience in the hockey world ... he will help make our organization better.”

Murray says he wouldn’t have achieved his dream of working in the NHL without his Suffolk Law degree, noting that he regularly applies the lessons he learned in courses like sports, labor, and employment law. “I think one of the best things about Suffolk is the diversity of the faculty and the ability to learn from their personal and professional experiences,” he said. “Their firsthand knowledge and expertise is invaluable.”