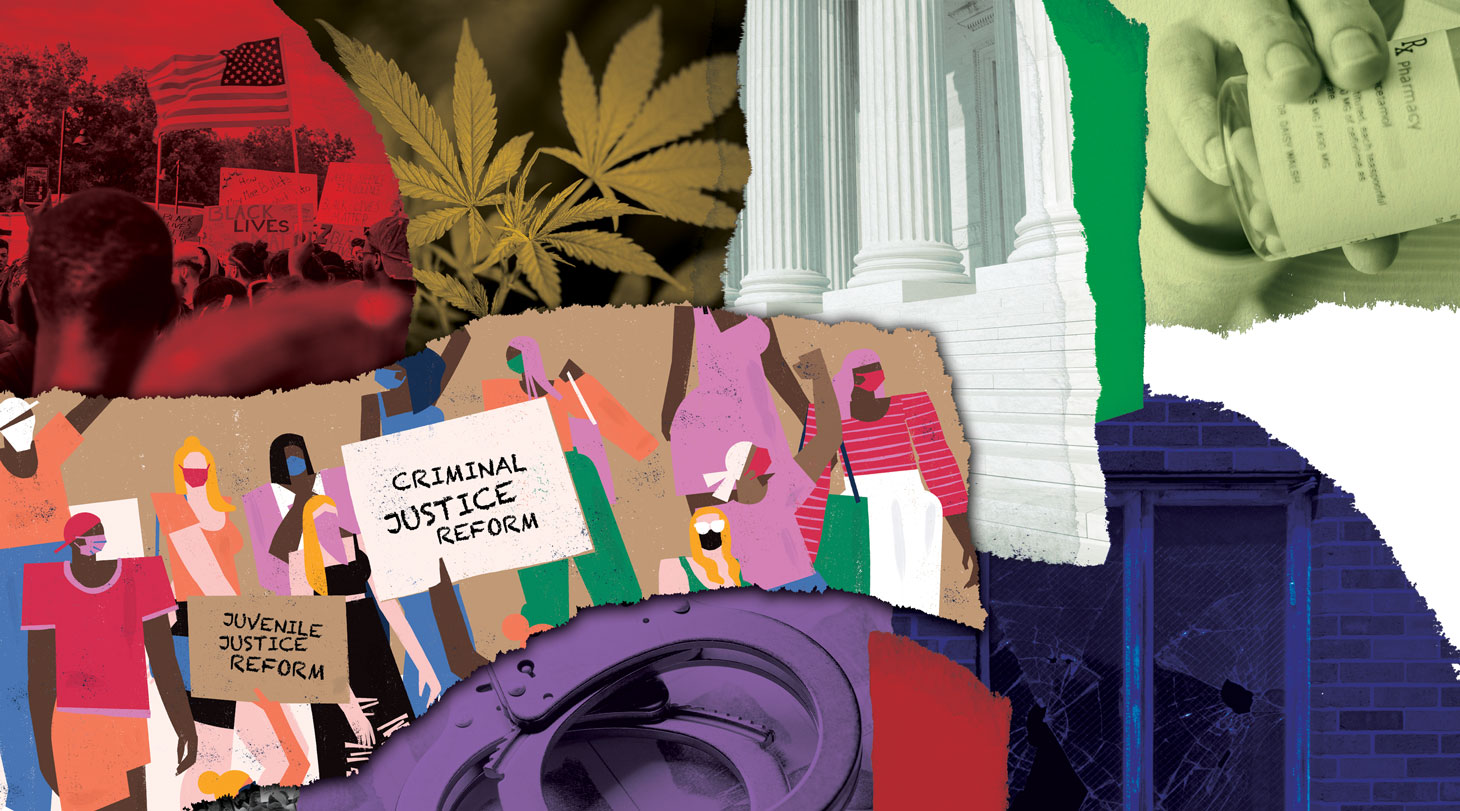 By Tom Mashberg with reporting from Michael Fisch

In his early years as a prosecutor in Suffolk County, Michael V. Glennon JD’10 says he struggled with how to help juvenile offenders.

“We were developing their criminal records but not doing the work needed to support them and keep them out of the system in the long term,” says Glennon, chief of the Juvenile Unit at the Suffolk County District Attorney’s Office. “Or we’d lean on a program we were familiar with rather than calibrating to that particular youth’s needs. So the outcomes we were getting for moderate- and high-risk youth were all wrong.”

Their goal was to increase public safety, while at the same time reducing youth involvement with the courts—and the lifelong barriers that ensue with a criminal record. That meant creating plans for services and interventions outside of the court system and appropriate to the specific offender.

Glennon is naturally bullish on the effort, calling it “one of the most important things I’ll do in my career,” and now he has hard data behind him.

Early statistics from the Juvenile Justice and Policy Data Board in Massachusetts, as well as a large body of national research, show that youths who have taken part in diversion programs are less likely to reoffend than those who are formally processed through the juvenile courts.

And according to the state’s Juvenile Justice Reform Coalition, each dollar spent on diversion produces benefits of $10.60 to $25.60 for the community.


Just one aspect of reform

Juvenile diversion is one of a number of criminal justice reform measures that have emerged locally and nationally in recent years, many of them spearheaded by Suffolk Law alumni.

Reform is, of course, an elastic and amorphous term. But in the arena of court reforms, Suffolk Law experts say, it includes model initiatives like the expansion of both juvenile and adult diversion programs; specialty courts that focus on drug addiction, homelessness, veterans’ issues, and mental health; major changes in bail laws; wider access to remote judicial hearings; greater use of prosecutorial discretion; and reducing jail populations, especially in the age of COVID-19.

A vital aspect of the reform movement is its tight focus on data and independent validation, so that skeptics can see if new approaches are objectively effective. One way to get the data is to offer more juveniles diversion programs. Nicole Siino JD’18, a graduate of Suffolk’s Legal Innovation & Technology Concentration, has developed a tool that helps achieve that goal.

While early results have been positive, more data is needed to learn whether the reforms championed by Suffolk-connected experts will pay long-term dividends in rehabilitation and public safety.

One Massachusetts legislator and Suffolk Law graduate instrumental in passing the state’s landmark criminal justice reform legislation of 2018 is Rep. Claire D. Cronin JD’85 of the 11th Plymouth District, House chair of the Joint Committee on the Judiciary, and the first woman to serve in that role. She was a primary author of the bill and oversaw the bipartisan conference committee negotiations that got it to the governor’s desk.

The law affects people of all ages who become ensnared in the legal system. Provisions include upping the age when youths can enter the court system from 7 to 12; removing restrictions on diversion programs to keep teenage first-offenders out of prison; allowing some criminal records for 18- to 21-year-olds to be expunged; ending mandatory minimum sentences for low-level drug crimes; and setting up a medical-release program for terminally ill and elderly inmates.

According to the Bureau of Justice Statistics, 65% of inmates in American jails have not been convicted of the offense they are charged with. They are awaiting court action but cannot afford what are often onerous or punitive fees and bail amounts. Those situations, research shows, lead to a higher rate of future offenses.

A centerpiece of the Massachusetts legislation is its bail reform measures, which require that judges, in setting bail, take into account a person’s financial resources and allow fees and fines to be waived for financial hardship. Judges must also justify in writing instances in which bail is set so high that it prevents someone’s release.

Cronin says she was especially gratified that her efforts had strong bipartisan support. “We’ve seen justice reform become a bipartisan issue around the country,” she says. “That’s because research and data show these reforms reduce recidivism, increase public safety, and save money.”

Christina E. Miller, who runs the Law School’s Prosecutor Program and served as the Chief of District Courts and Community Prosecutions at the Suffolk County District Attorney’s Office, has long focused on the complex matter of prosecutorial discretion. She spent years managing the hiring and training of assistant district attorneys at a time when efforts to have prosecutors treat lower-level legal and criminal matters more holistically took hold as a reform priority.

“Every day an ADA makes from 30 to 100 discretionary decisions,” she says. “There are charging and sentencing recommendations, financial penalties, bail amounts, and so on.” For decades, some prosecutors focused on using those decisions to drive guilty pleas.

But a new generation of progressive DAs in Massachusetts are rejecting that mindset and embracing reforms.

“What I’ve seen that is really encouraging is that options are growing,” Miller says. “Things like pre- and post-trial arraignments, diversions and alternative sentencing options, and the assigning of cases to specialty courts that are ‘pre-adjudication,’ so an individual is held responsible and is granted support without the need for a guilty finding.”

Miller is working on increasing such options as co-chair of the Massachusetts Trial Court’s Boston Community Justice Task Force, a group charged with increasing diversion, especially in the areas of mental health and substance abuse.

Rachelle Steinberg JD’00, MSCJ’03, assistant deputy superintendent with the Suffolk County Sheriff’s Office, says that the justice system is starting to see substance abuse as a problem that doesn’t lend itself to simply leaving a person in jail. Public safety outcomes for the community are better and less expensive when people get needed medical, mental health, and substance-abuse treatment and learn some life and vocational skills, she says.

Steinberg oversees the Opioid and Addiction Services Inside South Bay program, or OASIS, which launched in 2018. The program focuses on intensive substance-abuse treatment and discharge-planning services for male pretrial offenders.

The men remanded to the unit, about 30 at any given time, aren’t free to leave, but haven’t been sentenced either, giving them a chance to turn their lives around through comprehensive substance-abuse counseling, mentorship and support from peers in the program, and other Sheriff’s Department offerings.

Most of the participants create individualized reentry plans with OASIS staff that are coordinated with local service agencies and include detailed program and treatment steps.

When judges decide that such a plan seems reasonable and in keeping with the nature of the crime, offenders may be released on probation or to a residential treatment program, or both, with strict guidelines.

Correctional facilities like Suffolk County’s are “managing a difficult challenge, as we have become de facto mental health and substance-abuse treatment facilities,” she says. “Our goal is to have someone walk out of our facilities, and the OASIS program, more equipped than when they came in. To do that, we offer evidence-based treatment and services that are gender-specific and trauma-informed.”

“I think today there’s more attention being paid to the science of substance abuse and mental health disorders, and how those intersect with criminal behavior,” she says. “The science leads you to spending more money up front before people are caught up in the justice system—more money for treatment beds, transitional housing, social workers, diversion programs, specialty courts.”

As enhanced data is collected about the savings accrued by treating the causes of criminal behavior as well as the positive public safety outcomes of keeping communities whole, she says, the state’s budgeting priorities will start to change—and that’s when criminal justice reform efforts will really begin to take hold. “Now,” she says, “when hearts and minds are in the right places, we lack the resources.”

Former DA Conley says Massachusetts prosecutors are more likely to embrace changes that would be politically anathema in more prison-oriented states. Prisoner numbers at the Suffolk County House of Corrections, for example, fell from around 1,000 when he took office to 500 in 2018.

“I think we have always been more advanced on justice reform,” he says, noting a wealth of data showing that “over the years our rates of incarceration have declined—and, remarkably, crime was going down as jail populations were going down.”

Anthony Benedetti JD’93, chief counsel for the Committee for Public Counsel Services, agrees that the state has made progress, especially with juvenile justice, probation practices, and bail reform. However, he cautions that “the state’s incarceration rates are still astronomical compared to Europe.”

“All of us who work in the system, including defenders, prosecutors, and judges, need to take responsibility for creating a fairer and more effective legal system,” he says.


A judge takes the long view

Serge Georges, Jr. JD'96, associate justice of the Massachusetts Supreme Judicial Court and long-time teacher at Suffolk Law, grew up in Dorchester and ran the Municipal Drug Court there from 2014 to 2018. In the end, reliable financing for the specialty court system and its affiliated diversion programs is key to success, he says.

Georges has been praised by the Massachusetts Bar Association and Massachusetts Lawyers Weekly, among others, for showing extraordinary compassion to low-level offenders—urging them to embrace diversionary programs and assisting them in staying off the courtroom to prison-cell conveyor belt.

“An appropriately staffed drug court is worth doing,” he says. “Otherwise it can be a waste of time. You need a clinician, a probation officer, the commitment of the DA’s office, a defense attorney, and long-term treatment beds all in place to make it work.”

Georges points to the drug courts, a major catch-basin for people who are headed for a life of crime. “It’s a shame courts may be the only way a person can get help,” he said.

In the end, criminal justice reform is as much about empathy and rehabilitation as it is about data and funding.

Benedetti asks, “If we cannot end the cradle-to-prison pipeline in Massachusetts, what hope does the rest of the country have?”

One answer to that question may lie within the pockets of the Massachusetts justice system that are finding practical ways to maintain public safety while giving some offenders a shot at redemption.