The passing of alumnus and former Trustee Gerard “Gerry” Doherty marks the end of an era in Massachusetts politics.

Doherty, who graduated from Suffolk Law in 1960 while serving in the Massachusetts House of Representatives, was deeply embedded in the civic life of the Commonwealth and worked on the historic presidential campaigns of all three Kennedy brothers. His 2017 memoir, They Were My Friends–Jack, Bob and Ted: My Life In and Out of Politics, details those relationships.

“Gerry Doherty was someone larger than life who actually made those around him better,” said Robert J. Allison, a Suffolk University history professor.

Doherty brought political savvy and legislative knowledge to his roles, but Allison said what made him truly indispensable was his character, integrity, and ability to bring people together.

“You can find people who can crunch numbers and can look at polling data, but understanding how to connect with people is the most important thing. It’s a character trait that he had and could use to great effect, and that’s one of the reasons the Kennedys and others relied on him,” said Allison.

Doherty served on the Suffolk University Board of Trustees from 1996 to 2014. He received the Law School Alumni Association’s Edward Bray Legacy Award in 2018 and the Alumni Service Award in 2005.

“Gerry was not only a civic leader—he was a philanthropic leader as well. For decades, he made a profound impact on the lives and careers of countless Suffolk Law students,” said Dean Andrew Perlman.

Doherty was responsible for nearly one-half million dollars in scholarship support, including one of the school’s public service scholarships. Many of the students benefiting from his philanthropy are from working-class towns, including Charlestown, where he was a lifelong resident.

“We admire his lifetime of tenacity and his insistence that individuals must make a difference in their communities,” Perlman said. “When America’s leaders needed counsel, he stepped up to help. And when Suffolk Law School and its students needed him, he answered the call.”

Doherty is survived by his wife, Judge Regina Quinlan Doherty, who received her Suffolk Law degree in 1973 and an honorary Doctor of Laws in 2005. 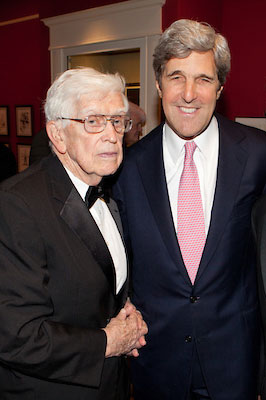