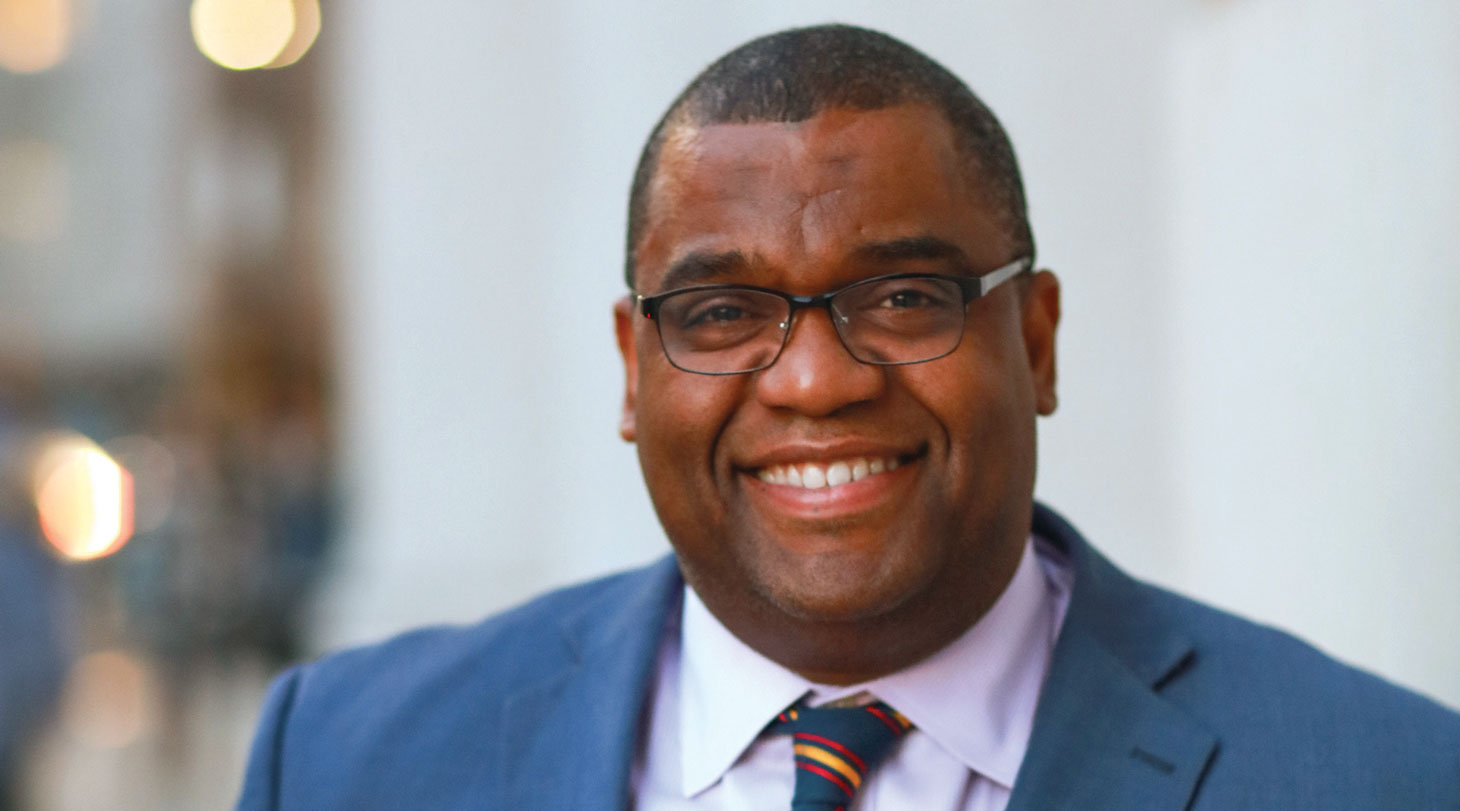 Over the course of his 25-year legal career, Judge Serge Georges, Jr. JD’96 has earned a reputation as a remarkably gifted communicator.

Whether he’s talking with professional colleagues, defendants in his Dorchester courtroom, or his students at Suffolk Law, Judge Georges is the kind of person who can connect with his listeners and cut to the heart of the matter, says Suffolk Law Dean Andrew Perlman.

Yet for a few brief moments this fall, Georges, 50, found himself speechless.

On November 17, Governor Charlie Baker announced Georges’ nomination to the Massachusetts Supreme Judicial Court. At a State House press conference, the governor praised Georges not only for his legal brilliance, but also for the humanity he has brought to his work as both a Boston Municipal Court judge and a teacher at Suffolk Law.

“Many lawyers say he’s their favorite judge,” Baker said. “Not because he gives them the answer they want, but because he knows the law, does his homework, and treats everyone in his courtroom with dignity and respect.”

Stepping to the microphone, Georges paused to collect himself. After thanking the governor, he said, “I can’t adequately express what this means to me—I just don’t have the words.” As a young Haitian-American boy growing up in Dorchester, he added, “I would never have dreamed this was possible.”

Yet Georges has spent his life believing in the possible—including in the classroom, where he has mentored law students, and in the courtroom, where he has earned a reputation for making litigants feel listened to, fairly treated, and able to move forward with their lives. As the governor put it, “It seems clear that no matter when Judge Georges becomes your friend and colleague, that relationship will last.”

“None of us get to where we are alone,” Georges said a few days later. “I try to give people the opportunity to be successful.”

In early December, Georges’ nomination was unanimously confirmed by the Governor’s Council. He joins two other Suffolk Law graduates on the seven-member court: Justices Frank Gaziano JD’89 and Elspeth Cypher JD’86. Even more significantly, he is only the fourth Black person ever to serve on the 328-year-old SJC.

Georges’ longtime friend, Suffolk Trustee Ernst Guerrier BS’91, JD’94, a Haitian-American who grew up in Mattapan, wept when he heard the news.

“Serge’s appointment was a great day for Suffolk, and for our diverse community,” he says. “It signifies everything that we preach. You can grow up in Dorchester or Mattapan or Roxbury or Jamaica Plain, and if you are given the opportunity and work hard, you can reach the highest level.”

While plenty of systemic racial barriers remain, she says, “I hope this helps Suffolk Law students, especially our students of color, realize the sky is the limit. Serge is proof of that.” University President Marisa Kelly calls Georges “a role model for our students, someone who embodies our very highest ideals. And in a period when our country is wrestling with criminal justice reform, he brings a deep understanding of how different communities navigate our legal system.”

Dean Perlman points out that Georges’ tenure on the Boston Municipal Court will provide “an often under-represented perspective” for the Supreme Judicial Court, whose members are rarely drawn from the district and municipal courts. “His professional experiences, particularly those involving the civil and criminal legal issues that individuals regularly encounter, will be especially valuable to the court,” he said.

Guerrier puts it this way: “What Serge has done for the past seven years is like practicing law in the ER. He has presided over the busiest court in the Commonwealth, and he’s done so with intelligence, compassion, and commitment.”


“What Serge has done for the past seven years is like practicing law in the ER. He has presided over the busiest court in the Commonwealth, and he’s done so with intelligence, compassion, and commitment.”


The early years in Dorchester

Georges was first appointed to the Boston Municipal Court in 2013 by Governor Deval Patrick, following more than 15 years as a trial attorney concentrating in civil litigation, criminal defense, and professional licensure and liability.

“I can’t tell you how much it has meant to me to be a judge in the neighborhood where I grew up,” he says.

From age 4 until his early 20s, Dorchester was home. He lived with his parents and two older sisters in a rented two-bedroom apartment on Hancock Street in Kane Square, surrounded by Irish-American, Cape Verdean, and Puerto Rican families. He and his friends loved to ride their BMX bikes through the neighborhood, flying past the courthouse where Georges would one day preside.

Education was everything to Georges’ parents, who had left Haiti to avoid political persecution. His father, Serge, Sr., who taught in the Boston public schools by day, held down a second job at Honeywell by night, while his mother, Maryse, worked as a data entry clerk for the Boston Stock Exchange and at the Safety Insurance Company, all so they could afford to send their children to Catholic schools.

Georges graduated from both Boston College High School and Boston College, where he majored in English. (He can still recite poetry he studied there from memory.) Having put their three children through college, Serge, Sr. and Maryse Georges bought their first home, in Randolph, where they live today. The judge lives nearby, with his wife, Michelle, and their two daughters.

Yet Dorchester remains home, the place that taught him “there are a lot of really good people who get bad breaks,” he says.

It’s a perspective he brings with him to the courtroom, where he is known for giving people a chance while also holding them accountable. “When you are practicing at the district and municipal court level,” he says, “you see there are plenty of people who have just made mistakes and need some guidance to get back on their feet, stop committing crimes, and become productive members of society.”

From 2014 to 2018, he presided over the Dorchester Drug Court, working with a team of clinicians, attorneys, police, and parole officers to provide substance-use offenders with consistent structure, expectations, and support. He calls the experience the most rewarding of his professional life.

“I’ve seen the kind of miracles that come with sobriety,” he says, “when people who have lost everything are able to reconnect with family, find employment and housing. After Georges’ SJC nomination was announced, his email inbox and phone were flooded with congratulatory messages, including some from former Drug Court clients. “It’s ironic they are calling to thank me,” he says. “I feel I should be thanking them. This work has given me so much.”

Prior to accepting his appointment to the SJC, Georges accepted another honor: Suffolk’s invitation to serve as Commencement speaker for Suffolk Law’s Class of 2021, where he will receive an honorary degree.

An adjunct faculty member since 1999, Georges has now taught a full generation of Suffolk Law students. At the start of every school year, when he leads incoming 1L students in their oath of professionalism, he shares how the notorious 1989 Charles Stuart case galvanized him to study law.

Georges still has a copy of that newspaper. “It’s old and yellow and I’m going to be buried with it, because it informed the rest of my life,” he says. Stuart was eventually revealed to be the murderer and committed suicide, yet there was no immediate reckoning, no admission of how an entire community had been presumed guilty and deprived of its legal rights.

After graduating from BC in 1992, Georges enrolled at Suffolk Law. There was, he says, a warmth to everyone he met, and the sense that faculty and staff alike cared deeply about students and wanted them to succeed. “People would take the time to check in with you, when things were going well and when they weren’t,” he says. “Suffolk was a place you could always come home to.”

Suffolk also lit a fire under him. “My professors were the best in the business and they started my love of the law,” he says. Friday nights would find him in the basement of the Archer building, debating the latest slip opinions with his classmate and close friend, Hank Brennan JD’96, now a noted criminal defense attorney. “I’m a nerd,” he cheerfully admits. “I love the intellectual stimulation of reading the law and thinking about how to apply it.”

Today, Georges lights those same fires under his own students in his courses on Trial Advocacy, Evidence, and Professional Responsibility. “He is an exceptional teacher,” says Dean Perlman. Assistant Dean Wright adds he’s the kind of professor “who empowers his students, and gives them a real sense of ownership of the material.” Georges brings all this with him to the Supreme Judicial Court—not only “his clear command of the law and his sharp analytical mind,” says Dean Perlman, “but also his desire to make a positive impact on the lives of others.”

The prospect of joining the nation’s oldest supreme court, operating under its oldest constitution, renders this most eloquent of men speechless once more. “I want to be part of a team that is working to get it right,” Georges says after a pause. “For a kid from Kane Square, this means everything.”